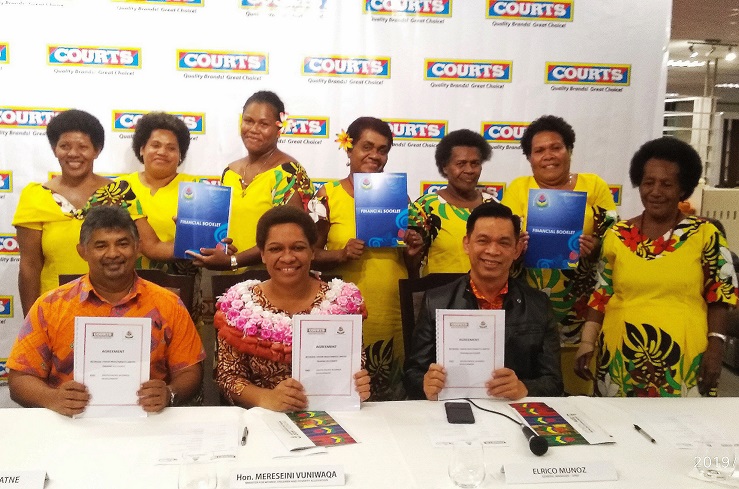 SPBD Microfinance Fiji Ltd general manager Elrico Munoz said their partnership with Courts helped with the financial inclusion of SPBD members by allowing them to be able to afford high quality products for their businesses and households that sometimes only middle- and high- income households could afford.

“Financial inclusion is not only about opening bank accounts or having a loan or savings, but it’s actually being part of the economic activities in the mainstream,” he said.

Now in its sixth consecutive year, the partnership has benefitted rural women entrepreneurs through projects such as the Sisters in Business initiative, the Courts Mother’s Day promotion, the SPBD Business Woman of the Year awards, the financial booklet for members, and through the provision of products such as washing machines, stoves and ovens from Courts at discounted prices and easy credit terms.

Minister for Women, Children and Poverty Alleviation Mereseini Vuniwaqa, while officiating at the event as chief guest, said she was pleased to see corporate entities focused on empowering women as entrepreneurs.

“I wish to emphasise the need for initiatives that can economically empower in the care economy. Women shoulder a disproportionate share of unpaid care work around the world, and gender imbalances in the distribution of care work constitute a root cause of women’s economic and social disempowerment,” she said.

Courts director of marketing Anil Senewiratne and Mr Munoz both highlighted the role the late Dr Jiko Luveni played in initiating the partnership and they acknowledged the longstanding support of the Ministry of Women, Children and Poverty Alleviation, including its assistance in identifying women’s groups around the country. The 2019 SPBD financial booklet was also launched at the event.