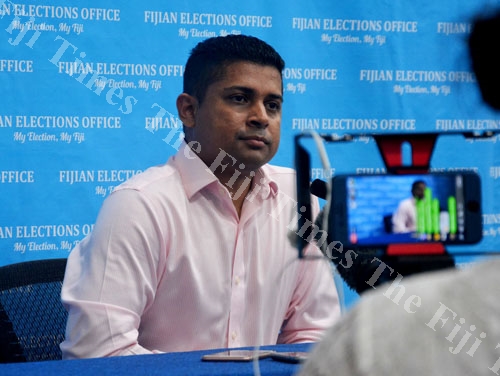 FOUR political parties have claimed that the tabulation process for the provisional results of the 2018 General Election was “not transparent”.

In a joint statement sent to the Electoral Commission yesterday, the leaders of the Social Democratic Liberal Party, National Federation Party, Fiji Labour Party and the Unity Fiji party claimed that during the tabulation process, the political party agents and candidates were not shown the documents from which the provisional results were posted on the national results tally.

The leaders claimed that the provisions of Division 8 of the Electoral Act 2014 — Tabulation and Declaration of Results — had not been followed by the Supervisor of Elections in declaring the provisional results announced up to the morning of November 15.

“As far as we know, the number of votes announced as having been received by each candidate does not show the polling stations from which the votes were derived. In other words, these cannot be verified against the votes recorded in the Protocol of Results as required under the Act,” the leaders claimed.

“In the circumstances, we are unable to accept the provisional results as announced and request that results be tabulated showing the votes received by each candidate and party from each polling station and that these be reconciled/verified against the original protocol of results certified by the presiding officers at each polling station.

The four political leaders requested a recall of the provisional result, claiming correct procedures needed to be followed.

Responding to the claims, Supervisor of Elections Mohammed Saneem said it was the parties failure to understand how the electoral system worked.

Mr Saneem said the provisional results were phone-called results so he could not give any data because it came through the phone, was entered into the system and updated as results as required in the law.

He said the political party officials needed to follow through the process on the field themselves.