Park gets a face-lift 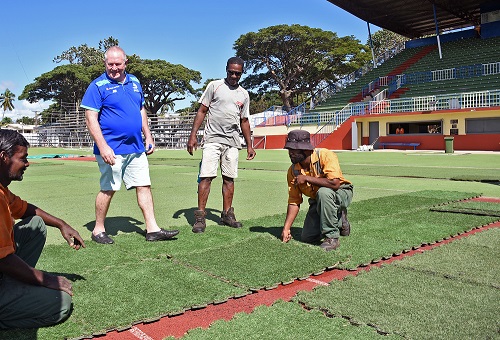 Fijian Drua Chief Executive Officer Brian Thorburn visited the Churchill park in Lautoka to check on the progress on the preparation for the Drua vs Chiefs upcoming clash on the 28th May 2022. Picture: REINAL CHAND

The thousands of patrons expected to converge at Lautoka’s Churchill Park on Saturday for the Swire Shipping Fijian Drua’s final match of the season in a revamped Super Rugby Pacific competition against the Gallagher Waikato Chiefs are expected to witness some noteworthy improvements to the infrastructure.

The visionary leadership of interim chief executive officer of the Fijian Drua Brian Thorburn has embarked on a mission of presenting a renovated Churchill Park to the fans despite the short time frame.

“We’re trying our level best to make as many improvements as possible before the match on Saturday,” he said.

Thorburn said there would be plenty of food outlets and a temporary grandstand is being constructed.

“We’re trying to create as much capacity as we can at Churchill Park to make the Drua matches available to the immense local fans, who are expected to turn up for the game.

“Also alcohol will be a part of the event also.”

Meanwhile, the Drua host the fourth-placed Chiefs on the Super Rugby Pacific points table at Churchill Park in Lautoka on Saturday at 3pm.