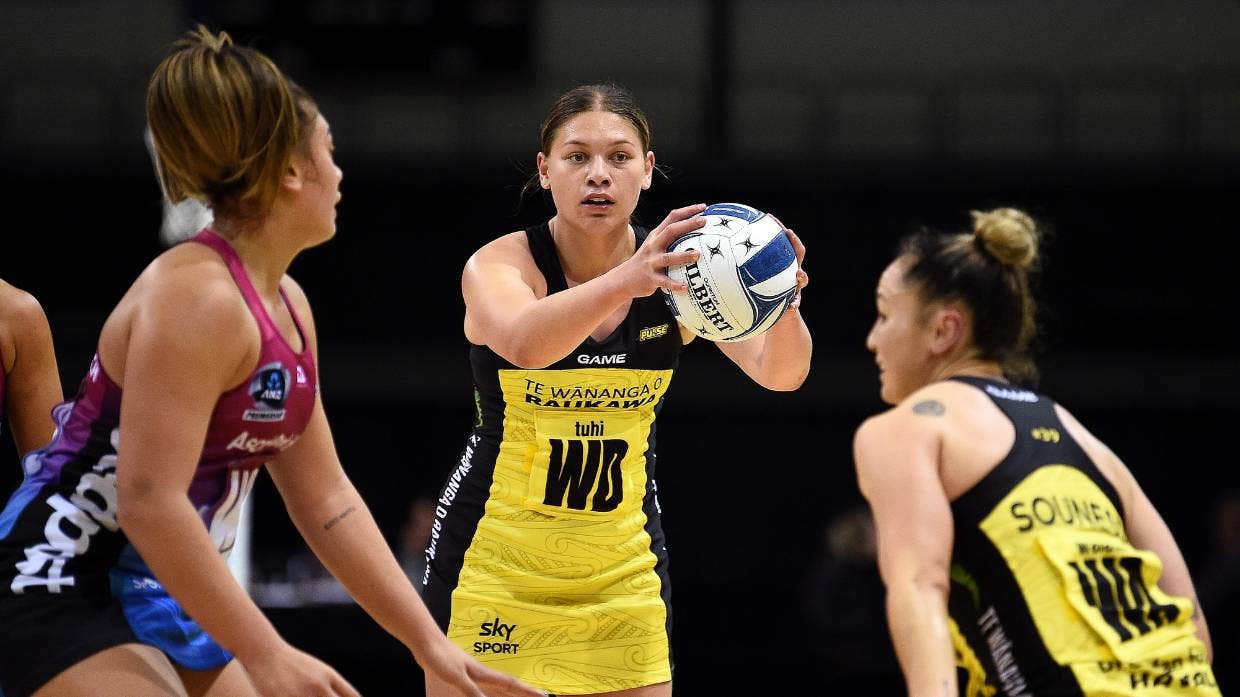 Paris Lokotui caught the eye of the Silver Ferns selectors during her time with the Pulse. JOE ALLISON/GETTY IMAGES

Paris Lokotui is hoping to add another international sport to her name as she eyes up a debut with the Silver Ferns.

The 19-year-old Central Pulse defender has already represented New Zealand in basketball and water polo, but it’s representing New Zealand at netball that drives her the most.

“I knew netball was something I wanted to do long term, so deciding between basketball and netball it came down to what I love the most,” she said.

“Being able to do it full time at 19, you don’t get used to it! To have netball as your job is pretty awesome.”

Her call up to the national netball squad came before the last series against England. She didn’t make it out on court, but is hopeful her time will come when the Silver Ferns play the Aotearoa Men’s team in a best-of-three series, starting on Sunday.

“It’s a surreal moment when you get a call from Noeline [Taurua] herself to ask you to join the environment with the Silver Ferns,” she said.

Her family, including her eight-year-old sister, were “more stoked” than she was to receive the call up.

“I think my dad cried a bit! My sister is stoked to tell her all friends that I’m in the Silver Ferns,” she said.

Lokotui (Ngāi Tahu, Ngāti Kurī, Te Rarawa, Te Aupōuri, Tonga) is Wellington-born and bred, and rose through the netball ranks in the capital. She’s one of two development players invited to join the Ferns for the series, the other being Georgia Tong from Waikato BOP Magic.

Being within the Ferns’ environment is a change from the day-to-day challenges of being in the Central Pulse. She said it’s about learning how to “grind it out”.

“It’s such a hard environment with people who are the best of the best, so being able to train and learn from them is something I’ve absorbed,” she said.

Playing against men isn’t new for her either. She’s trained with them previously when preparing for the ANZ Premiership. She knows the series is going to be tough, but is ready for the challenge.

“We know they have a lot height, and are physically stronger than us, but I think we need to stick to our own structures, and we’ve got a good structure in place for this series. Hopefully it will work out,” she said.

Playing against men “100 per cent” makes the Ferns better, she said.

“Leading into the World Cup was beneficial for them. It addressed a lot of things to work on. Hopefully that’s something we can do and work on for the Commonwealth Games.”

She’s got something to say to the men’s team ahead of the series.

“Whoever comes out, we are ready and looking forward to it.”

Silvers Ferns assistant coach Deb Fuller said the selectors have been keeping an eye on Lokotui for several years, through her involvement with the Pulse and the Under 21 side.

They have been impressed with her development of skills, and how she has stepped up to the “demanding challenge” the Ferns’ camp offers. Fuller loves Lokotui’s “no fuss and just gets on with it” attitude.

“She’s taken it all in her stride. She has an air of maturity, she’s an astute young woman. She has fitted in really well,” she said.

“She’s got great anticipation, which is something you expect with Wellington defenders. She can read the game really well, and position herself to maintain constant pressure on anyone she defends, and it’s a huge asset for a young defender coming in.”

Fuller is hopeful netball fans will get to see Lokotui debut during this series.

“It will be a great reward for everything she’s taken on. If that opportunity comes, she’s more than ready to have a taste of what that next level is like. It is a big jump from ANZ to international level,” she said.

“When I see a young person like Paris come in, she can hold her own, she knows what she’s about, she’s clear on what she can and can’t do, and she’s prepared to explore her limits.”

Lokotui definitely has a bright future on the international netball scene, Fuller said.