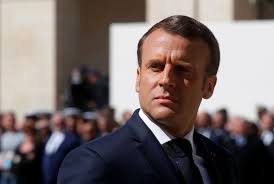 PARIS, 01 JULY 2019 (THE AUSTRALIAN) – France controls islands in the Pacific­ with more than one million residents and sends navy ships into the South China Sea at least twice a year.

The European power’s influence in the region dates back to the 18th century, when explorer Louis-Antoine de Bougainville pushed to establish French settlements in the South Pacific following the loss of Canada to Britain.

The French retain control over a group of islands in the region includin­g New Caledonia, French Polynesia, the Society Islands and the Wallis and Futuna islands.

French President Emmanuel Macron used a visit to Australia last year to declare no nation should be allowed to dominate the South Pacific, following concerns China was gaining too much influence in the region.

“It’s important with this new context not to have any hege­mony,” Macron said in his visit when Malcolm Turnbull was prime minister.

French Armed Forces Minister Florence Parly warned a forum in Singapore last month that there was a threat of “global confront­ation” in the Pacific.

“It takes no Kissinger to see the building blocks of a global confrontation taking place here,” she said. France has military bases in French Polynesia and New Caledonia with more than 2000 personnel.

“Given we have similar values and similar ways of looking at the world, I think it is useful for Australia to have a country like France that is there and willing to make a bit of an effort on the regional securit­y front,” Jennings said.

“It means that France also takes interest in neighbouring Pacific Island countries as well. So, they will engage with military forces, including Papua New Guinea.”

Jennings said the French territories in the South Pacific were “indivisible from any other part of France”.

“Ten to 15 years ago there was at least some rumblings of independence support in New Caledonia and that has largely and successfully been put to bed by the French,” Jennings said.

He said the French were still passionate about the region.