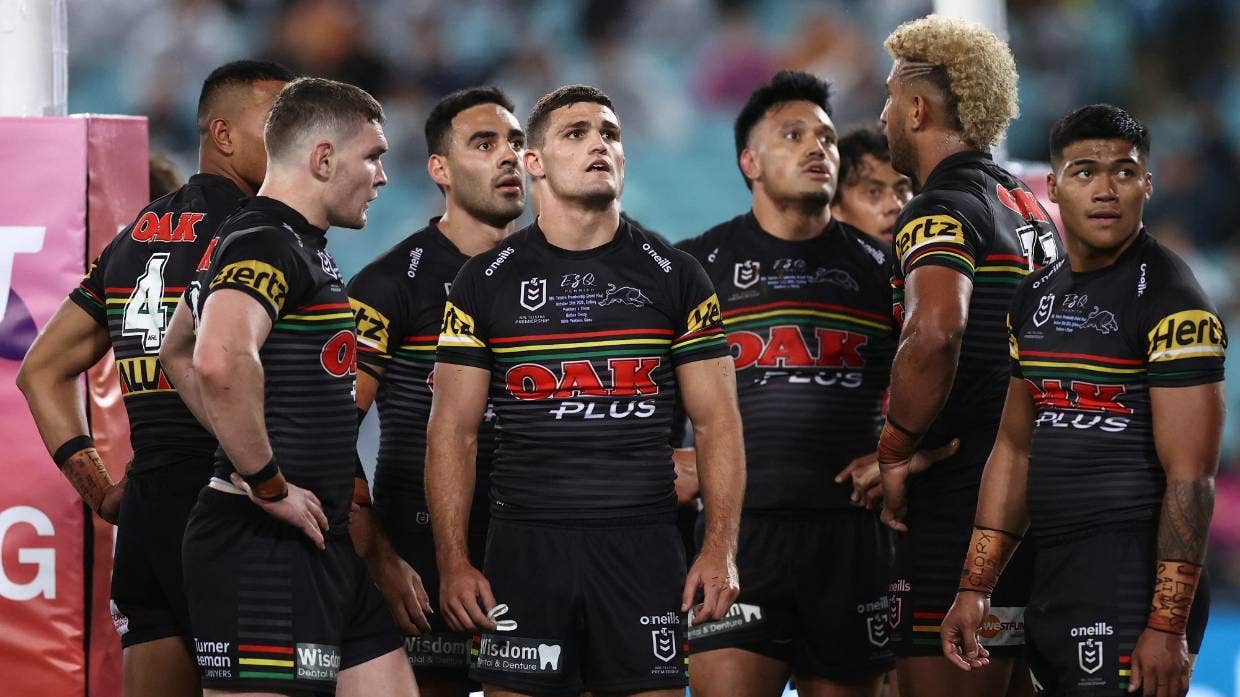 Nathan Cleary, centre, of the Panthers is filthy at himself for throwing an intercept pass in the grand final. Picture: STUFF SPORTS.

(NRL)—Panthers halfback Nathan Cleary is wary of the impact the 2021 Origin series could have as the NRL front runners prepare for possibly their highest representation in club history.

Cleary is no stranger to the Ampol State of Origin arena but is the only player in the current squad who has endured the physical and mental toll of a three-game series played in the middle of the year.

Cleary told NRL.com in August last year of his relief that the 2020 Origin series had been pushed back to November given the emotional drain previous campaigns in 2018 and 2019 had taken on him.

The Panthers dodged representative football during their 17-win streak last year but their stunning run of success guarantees they’ll be heading into uncharted territory this season with stars missing.

At least eight Panthers could come into contention for the series opener on June 5, the most since Game One, 2004 when Luke Rooney, Luke Lewis, Craig Gower and Trent Waterhouse represented NSW and Rhys Wesser and Matt Sing played for Queensland.

Five-eighth Jarome Luai, winger Brian To’o, back-rower Liam Martin and centre Stephen Crichton are in the mix to debut for the Blues, while Kurt Capewell’s efforts in last year’s series for Queensland are likely to see him retained.

Tireless back-rower Isaah Yeo played the second and third games last year for the Blues and is on course to be there again.

Working in Samoan pair To’o and Luai’s favour is the fact there will be no international matches this year on the weekend of Origin II on June 26.

“It’s something we’ll have to deal with at the time depending on who gets picked, but it’s another challenge that we can look forward to and rise to,” Cleary said on Monday.

“Depending on who does get picked there are a lot of people waiting in the wings, younger players that are ready to go.

“Our NSW Cup team is undefeated. We do opposed sessions with them and they’re pretty even. There are some young guys knocking the door down waiting for their opportunity.”

The Panthers have been faultless so far in 2021 and lead the competition in various statistical areas of attack.

The question is, when will their regular-season run of form come to an end?

“I don’t think it ever becomes a conversation within our group … between the group, you probably forget that it’s 8-0,” Cleary said.

“The pleasing thing is we probably haven’t been playing at our best but we’ve found ways to win. That always gives us an opportunity to get better for the coming weeks ahead.

“It’s the beauty of having a young team, everyone wants to play well and everyone enjoys playing footy.

“At the end of the day, that’s why you play footy and sometimes it can get lost but definitely not this group.”