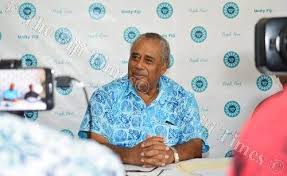 The tentacles of the impacts of COVID-19 are many and pervasive — from social, to economic — and the challenges they pose must be addressed immediately before they cause further damage, says Unity Fiji Party leader and former Reserve Bank of Fiji governor Savenaca Narube.

Speaking at the Unity Fiji alternative budget event, he said an estimated 130,000 plus workers had either lost their jobs, were on reduced pay or on leave without pay.

He said the figure represented more than one third of the formal work force, “and this number will rise”.

Government, he said, had revealed that its debt position would rise above 60 per cent of the GDP.

This debt position, he believed, would balloon to 80 per cent if necessary actions were not taken immediately.

“The RBF expects the economy to decline by 21.7 per cent this year, this is the largest in any of our history,” he said.

“We estimate that poverty will rise to 50 per cent of the population from its current level of 30 per cent and that will push an additional 200,000 of our people into poverty.

“The serious social impacts of domestic violence and suicide reflect the financial strengths families and individuals are going through.

“The actual cash that Government gave to the people to survive the greatest crisis of our lives was only $150 million or 15 per cent of the total package announced in the COVID-19 budget.”