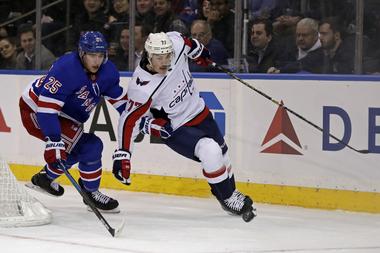 Artemi Panarin and Pavel Buchnevich scored within a 23-second span early in the third period Wednesday night for the host New York Rangers, who snapped out of a slump with a 4-1 win over the Washington Capitals.

Panarin scored twice — he opened the scoring with a power-play goal in the second — while Brett Howden scored later in the third for the Rangers, who ended a two-game losing streak in which they were outscored 13-6 by the Tampa Bay Lightning and Florida Panthers.

The two-goal game was the first of the season for Panarin, the 18th multi-goal effort of his career and first since he scored twice for the Columbus Blue Jackets against the Chicago Blackhawks on Feb. 16.

Goalie Henrik Lundqvist made 30 saves as he earned his 454th win and moved into a tie with Curtis Joseph for fifth place on the NHL’s all-time list.

Evgeny Kuznetsov scored in the third period for the Capitals, who had a two-game winning streak snapped as they fell in regulation for just the fourth time this season. Goalie Braden Holtby recorded 27 saves.

After a scoreless first period, Panarin gave the Rangers a lead they’d never relinquish 1:14 into the second, when he fired a shot beyond the glove of Holtby with 13 seconds left on the power play.

Panarin’s second goal also came on the power play. The center got open to the right of the net as Kaapo Kakko sent a no-look pass between the legs of Capitals left winger Beck Malenstyn and to Panarin, who fired a shot under Holtby’s arm.

Panarin’s goal was being announced when the Rangers went ahead 3-0 on a nifty exchange between Buchnevich and Filip Chytil, the latter of whom was to the right of the cage when he fired a pass across the crease to Buchnevich, With Holtby leaning to his right, Buchenvich tucked the puck into the let corner of the net.