Pan claims first tour win by one stroke over Kuchar 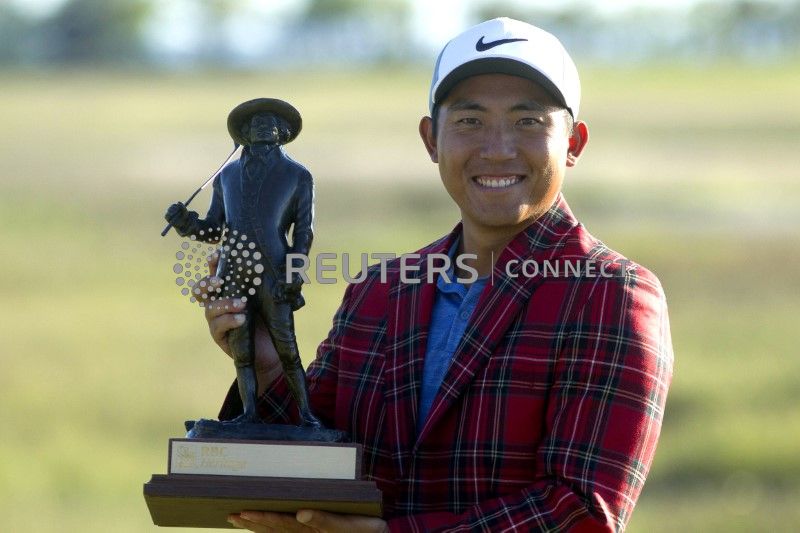 (Reuters) – Taiwan’s Pan Cheng-tsung held steady when it counted and won his first PGA Tour tournament with a one-stroke victory over Matt Kuchar as world number one Dustin Johnson stumbled badly on the back nine at the RBC Heritage in South Carolina on Sunday.

Pan, who goes by the initials C.T., collected a birdie and two pars on his last three holes to shoot a four-under par 67 and end a tense final round at 12-under 272.

Kuchar, finishing ahead of Pan, used a birdie at the last to also shoot 67 and waited as Pan, ranked 113 in the world, held steady at the end.

“It’s something when I was younger I always dreamed of. Watched Tiger (Woods) playing growing up,” the 27-year-old Pan told CBS television after the victory.

“That’s why I came to the U.S., that’s why I went to college to go through all the necessary steps to be here.

“I am very, very happy that I finally did it.”

Pan took the lead with a nine-foot birdie, his fifth of the round, at the 16th after a bogey at the 15th.

“I knew I needed two more birdies coming in to make sure I had the W,” the former University of Washington golfer said. “I hit good shots on 16, and 17 and 18 I hit really good shots.”

Victory, however, was not assured until Cantlay, Piercy and first and second-round leader Lowry completed play.

The number one ranked amateur for part of 2013 stayed ready for a possible playoff by hitting balls on the practise green, finally raising his arms triumphantly after being told he had won.

“It’s still really hard for me to believe,” said Pan, who had won twice on the PGA Tour Canada in 2015 and finished second twice in PGA Tour events, including last year’s Wyndham Championship.

Kuchar, a winner at Hilton Head in 2014, made a run at another title with three birdies in five holes before a bogey at the seventh.

He regrouped for birdies at 13 and 15 before a another bogey at 17.

“It was so much fun that back nine,” said Kuchar, who ended his round with a sixth birdie.

“To have a chance, to be playing some good golf, make a handful of birdies, and see how much I could do out there sure was fun.”

Johnson had begun the round with a one-stroke lead but had three bogeys and two double bogeys to drop seven shots in a five hole stretch on the back nine at Harbour Town Golf Links on Hilton Head Island.