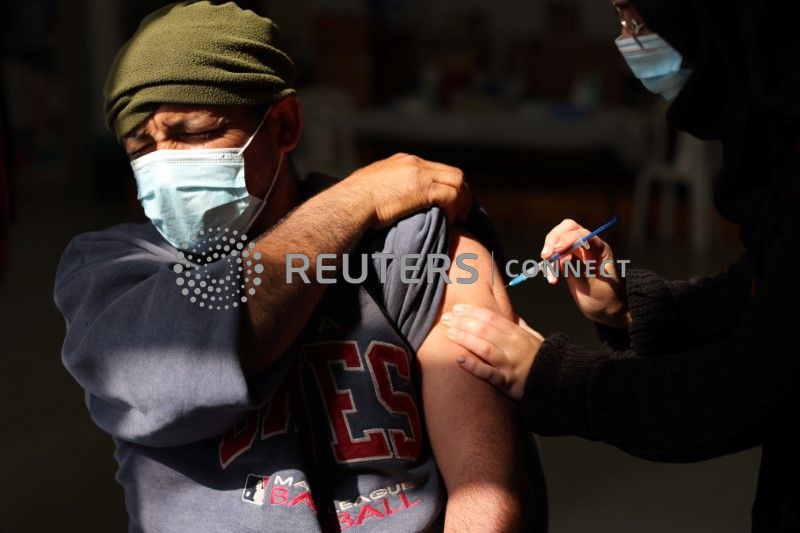 FILE PHOTO: A Palestinian labourer who works within Israel or its settlements in the occupied West Bank, is vaccinated at an Israeli facility at Shaar Efraim crossing from Israel to the West Bank, March 8, 2021. REUTERS/ Ammar Awad

RAMALLAH, West Bank/TEL AVIV (Reuters) -The Palestinian Authority (PA) cancelled a deal on Friday to receive soon-to-expire COVID-19 vaccines from Israel after an initial Israeli shipment showed an expiration date sooner than had been agreed, the PA health minister said.

Israel and the PA announced a vaccine swap deal earlier on Friday that would have seen Israel send up to 1.4 million Pfizer-BioNTech doses to the PA, in exchange for receiving a reciprocal number of doses from the PA later this year.

The doses were due to “expire soon”, Israeli Prime Minister Naftali Bennett’s office said in a statement announcing the deal. The PA said they had been “approved in order to speed up the vaccination process” in the occupied West Bank and Gaza.

“They told us the expiration date was in July or August, which would allow lots of time for use,” PA Health Minister Mai Alkaila told reporters later on Friday.

“But (the expiration) turned out to be in June. That’s not enough time to use them, so we rejected them,” she said.

The PA cancelled the deal over the date issue, a PA spokesman said, and sent the initial shipment of around 90,000 doses back to Israel.

Bennett’s office did not immediately respond to a request for comment.

Rights groups have criticised Israel, which led one of the world’s swiftest vaccination campaigns, for not doing more to ensure Palestinian access to doses in the West Bank and Gaza, territory it captured in a 1967 war.

Israeli officials argue that under the Oslo peace accords, the PA health ministry is responsible for vaccinating people in Gaza and parts of the West Bank where it has limited self-rule.

The vaccine deal was among initial policy moves towards the Palestinians by Bennett, who was sworn in on Sunday and replaced veteran leader Benjamin Netanyahu.

Around 55% of Israel’s 9.3 million population are fully vaccinated – a coverage rate largely unchanged by this month’s expansion of eligibility to include 12- to 15-year-olds.

Some 30% of eligible Palestinians in the West Bank and Gaza, home to a combined 5.2 million people, have received at least one vaccine dose, according to Palestinian officials.

According to a poll released on Tuesday by the Palestinian Center for Policy and Survey Research, 40% of Palestinians are willing to take the vaccine once it is available, while 35% say they and their families are not willing to get vaccinated.

The Palestinians have received vaccine doses from Israel, Russia, China, the United Arab Emirates and the global COVAX vaccine-sharing initiative.