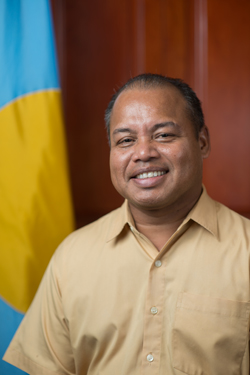 KOROR (Island Times/Pacnews) — Palau Vice President and Justice Minister Raynold Oilouch says the increasing presence of the United States military in Palau is part of the request of this island country to the U.S. to enhance security and discourage illegal activities in its waters.

Oilouch was responding to the media’s inquiries during a U.S. Air Force exercise at the Palau International Airport last week.

He said Palau has always requested the U.S. to increase its presence here.

He added that the military forces of Palau’s other allies such as Taiwan, Japan and Australia have also visited Palau.

“We might not have a military, a navy or whatever but this way we can contribute,” Oilouch said.

Asked by the media what prompted the sudden increase in U.S. military presence in Palau, U.S. Ambassador to Palau Amy Hyatt said the U.S. has always been conducting a steady stream of exercises in Palau as part of America’s commitment to the security and defense of the island nation.

“We’re always happy to come here and demonstrate our commitment to Palau, and Palau has been a wonderful host for this exercise,” Hyatt said.

The public affairs spokesman of the U.S. Pacific Air Forces, Maj. Phillip Ventura said the U.S. Air Force based on Guam was in Palau as part of the Air Force’s efforts to enhance dispersal capabilities.

U.S. Air Force F-22 fighter jets and a C-130 mobility aircraft were parked at the Palau International Airport for a public display on April 25.

Locals got the chance to tour the C-130 aircraft and see the fighter jets at a close distance.