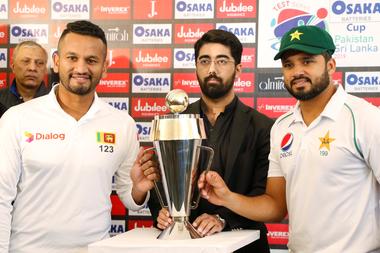 (Reuters) – Pakistan’s first test match on home soil since 2009, which starts against Sri Lanka on Wednesday, is a moment to rejoice for the whole country, Pakistan captain Azhar Ali said on Tuesday.

Other teams refused to travel to Pakistan due to security concerns and the side were forced to play home tests at neutral venues in the United Arab Emirates.

“It’s a moment to rejoice, not only for the players but the whole Pakistan nation,” Azhar told reporters. “Test cricket’s return to Pakistan after 10 years is an opportunity for us to get back on the winning track.

“We had a tough series in Australia and the way we lost there was disappointing. Moving forward, we see this home series as an opportunity and advantage to turn things around.

“We will try our best to fix our mistakes and improve wherever we had been lacking. We have outstanding talent in our squad. They have potential and, if we implement it, results will be good.”

The matches are part of the World Test Championship in which Pakistan are yet to get off the mark after two innings defeats in Australia. Sri Lanka are fourth with 60 points from two matches.

Sri Lanka are coached by Mickey Arthur, who led Pakistan for three years before taking up his role with Sri Lanka last week.

“If someone is with you for so long, he does have a lot of information about you,” Azhar said. “In cricket these days, we all have a lot of knowledge about each other’s strengths and weaknesses, but yet players score runs.

“Mickey does have a lot of insight about us, but we believe that whatever the challenge he will throw at us, we will counter.”