Pakistan hit back at critics with morale-boosting win 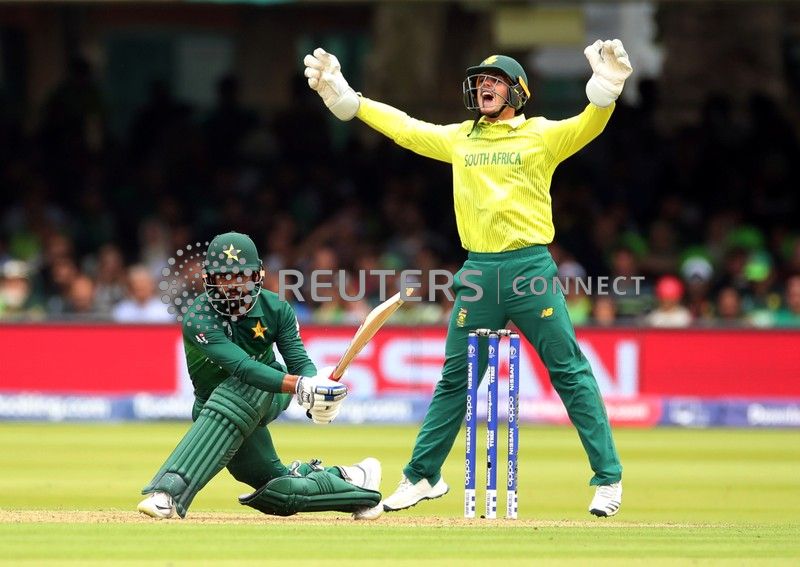 LONDON (Reuters) – Stung by their humiliating defeat to India in their last match and by the backlash from their fans back home, Pakistan came out buzzing on Sunday as they kept alive their Cricket World Cup hopes with a morale-boosting 49-run win over South Africa.

Sarfaraz Ahmed’s team faced a difficult build-up to the game at Lord’s as they simply could not escape the nightmare of being beaten by India last Sunday, taking their win-loss record to 0-7 against their arch rivals in the World Cup.

The loss led to the Pakistan Cricket Board launching a “robust review” of recent performances while an image of Sarfaraz yawning during the India defeat went viral on social media – with fans suggesting it summed up the team’s lackadaisical approach to the tournament as they had won only one of their previous five matches before Sunday.

Pakistan coach Mickey Arthur hoped the win against his native country would spark a revival considering the 1992 champions will almost certainly have to win their remaining matches against New Zealand, Bangladesh and Afghanistan if they are to snatch one of the top four spots to reach the semi-finals.

“Last Sunday I wanted to commit suicide, but it was only one performance. We always keep telling our players, it’s one performance,” Arthur, whose team are now seventh in the 10-team standings, told reporters.

“The guys were incredibly hurt, by media, by public, by social media… The guys didn’t sleep much.

“What I do know is … when their backs are to the wall, we get some good performances out of them. Hopefully we got a proper reaction from them today that can just shut some people up for a little while.”

From the start on Sunday, it looked like Pakistan had hauled in 11 different players than those who took to the field against India.

A week ago, there appeared to be no urgency in their run chase even though they faced a stiff victory target with their neighbours India having amassed 336-5.

Even with the threat of rain hovering over the contest, they made no effort to come anywhere close to the required run rate needed to win under the Duckworth/Lewis calculations for weather-shortened matches. They lost by 89 runs.

But as Arthur summed up: “It’s amazing what a difference a week makes.”

Serenaded by a sea of green and chants of “Pak-is-tan Zindabad” in the 30,000-capacity arena, Sarfaraz’s team got off to a flying start against South Africa with openers Fakhar Zaman and Imam-ul-Haq hammering 29 off the first four overs.

The early onslaught set the tone of the match and South Africa, who needed to win to keep alive their own World Cup hopes, ran out of ideas on how to stem the flow of runs as Haris Sohail clobbered the ball all over the ground to score 89 off just 59 balls to propel his team to 308-7 off their 50 overs.

“Today we got some just reward. We are alive and kicking,” said Arthur, whose team’s only victory in the tournament before Sunday was a shock win against hosts England.

“And if we play our best game we can beat anybody. Whether that is New Zealand, Afghanistan, Bangladesh, our remaining games, or England, we showed, we put our three disciplines together we are as good as any team in this competition.

“That was why it hurt us so much this last week… because every time they go out and represent Pakistan, they are incredibly proud about it.”