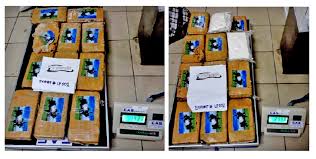 36 bars of cocaine which were allegedly found on an island of Makogai. Picture: SUPPLIED/Fiji Police

THE seizure of 500 kilograms of cocaine in Solomon Islands last month, the seizure of cocaine and smuggling of firearms in Papua New Guinea (PNG) coupled with the recent findings of cocaine being washed ashore in parts of Fiji only goes to show that small Pacific Island countries are being targeted by transnational criminal groups.

Oceania Customs Organisation (OCO) head of secretariat Roy Lagolago made this remark during the signing of a memorandum of understanding (MOU) between the OCO secretariat and the Melanesian Spearhead Group (MSG) secretariat yesterday.

“I know recently you probably seen in the media around the region and the world that transnational criminal activity is beginning to increase here in the Pacific,” Mr Lagolago said.

“Last month there was 500 kilograms of cocaine seized in Solomon Islands and up in PNG cocaine was also seized and firearms are being smuggled.

“No longer is New Zealand and Australia becoming the threat in the region but now countries like Fiji, PNG, Solomon Islands are starting to experience this and that is true when you see cocaine washing up on our shores here in Fiji,” he said.

Mr Lagolago said nowadays the Pacific was no longer considered a sleepy hub any more because this was where transnational criminal groups were using to transit all their goods through.

He added one of the key initiatives of OCO was security in the region and the signing of the MOU would ensure the two organisations would bring their security initiatives together and make it more tangible.

Mr Lagolago said the OCO secretariat was signing an MOU because MSG member countries formed some of the biggest administrations under the OCO membership.

“These countries are Fiji, Papua New Guinea, Solomon Islands and Vanuatu and the majority of the Pacific population come from these countries,” Mr Lagolago said.