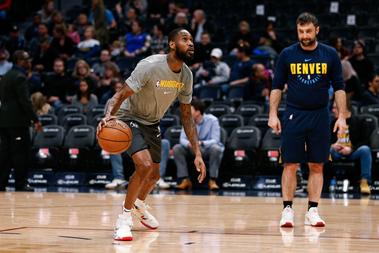 Doug McDermott buried two game-changing 3-pointers midway through the fourth quarter and Domantas Sabonis took over down the stretch to complete a triple-double Sunday night as the Indiana Pacers rallied from behind to beat the host Denver Nuggets 115-107.

After trailing by as many as 11 points in the third quarter, the Pacers finally caught the Nuggets for the first time since 0-0 on a McDermott 3-pointer with 6:59 to play that produced a 91-all tie.

The game was subsequently deadlocked at 93 and 95 before McDermott followed a hoop by the Nuggets’ Jerami Grant with another 3-pointer, this one giving Indiana the lead for good at 98-97 with 4:13 to play.

Sabonis then scored the Pacers’ next six points, extending the visitors’ lead 104-99 with 1:30 remaining.

McDermott bombed in another 3-pointer and Malcolm Brogdon slammed home a dunk as Indiana held on to win for the fifth straight time.

McDermott finished with a season-high and team-best 24 points.

The former Nuggets first-round draft pick recorded a career-best with six 3-pointers in seven attempts, helping the Pacers outscore the Nuggets 39-9 from beyond the arc.

Sabonis finished with 22 points, 15 rebounds and 10 assists, giving him his first career triple-double.

T.J. Warren (22) and Brogdon (22) made it four Pacers with 22 or more points in a balanced attack. Justin Holiday added 14 off the bench.

Playing for a second game in a row without starters Paul Millsap, Gary Harris and Jamal Murray, the Nuggets scored the game’s first six points and never trailed until McDermott’s 3-pointer with 4:13 remaining.

Denver led by as many as six in the first quarter, nine in the second and 11 in the third.