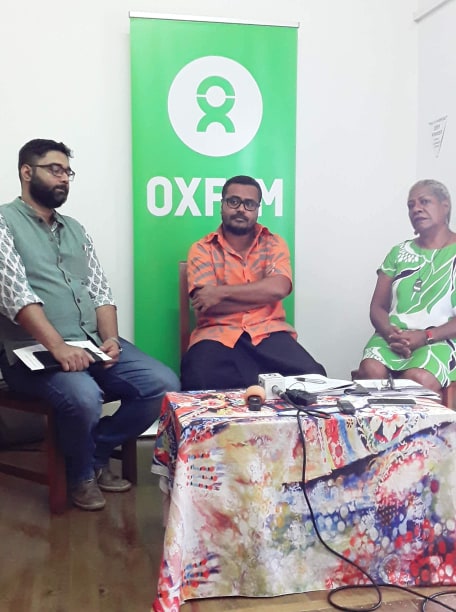 OXFAM Pacific held a briefing yesterday at their office in Suva, leading up to the 52nd Asian Development Bank (ADB) annual meeting on Denarau Island from May 1 to 5.

The event will have about 5000 people gathering at the venue, which is an important opportunity for Pacific Islanders as well as organisations in Asia to put forward critical issues from the regions.

This was according to the director of Oxfam Pacific Raijeli Nicole who said one of the key areas which they would be focusing on was addressing climate change.

“When the IPCC (Intergovernmental Panel on Climate Change) report came out last year in October, what was really the key fact for us to take away as Pacific Islanders was that we only have a window of 12 years of action.

“In terms of capping global warming at 1.5 degrees, anything higher than that is catastrophic for us as a region,” she said.

For the organisation, addressing climate financing is one of the critical areas. Oxfam in the Pacific had put out a briefing pack for the leaders attending the ADB meeting in areas which addressed financing the future people needed.

“At Oxfam, what’s critical for us to put at the front is the future has to be inclusive, sustainable and climate just for Pacific Islanders as well as for Asia.”

Ms Nicole said the briefing report was about addressing climate finance such as where the money was going and how it was managed as well as who were responsible for making these decisions. Oxfam in the Pacific’s climate finance adviser Dr Jale Samuwai said the briefing focused on what they would like their development partners and donors such as the ADB to be involved in, considering the evidence, in terms of the IPCC 1.5 report.

“We are calling for a range of measures to address the dire impacts of climate change that are already being felt across the Pacific.”

He urged ADB and its partners to be open to acting on the experiences of those people at the forefront of climate change as well as the concrete actions Oxfam was suggesting.