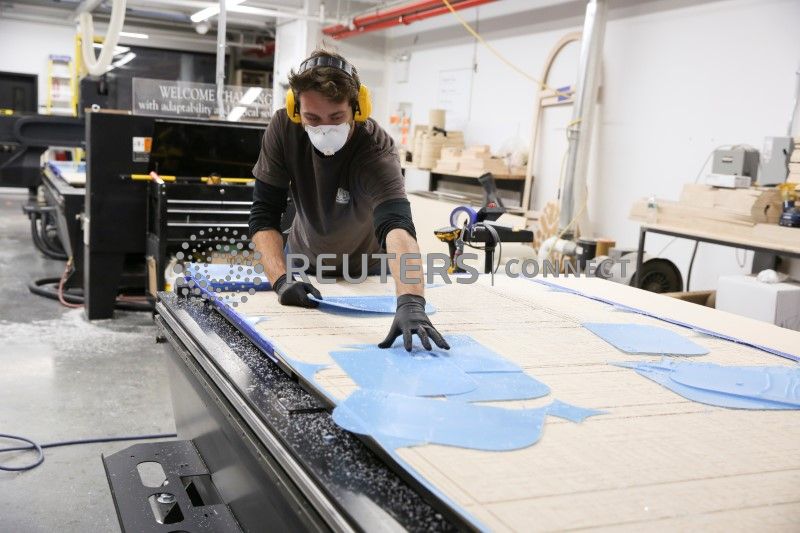 Flint Awbrey a CNC operator at Bednark produces medical face shields, as the demand for their production rapidly increased due to concerns over the spread of coronavirus disease (COVID-19) at the Brooklyn Navy Yard in the Brooklyn borough of New York City, U.S., March 24, 2020. REUTERS/Caitlin Ochs

NEW YORK (Reuters) – It had never occurred to Michael Bednark to make face shields at his Brooklyn factory before last week, but by Sunday he was carrying a prototype into New York City’s health department headquarters, to be appraised by city officials desperate for resources.

Nurses and doctors have pleaded for more protective gear to prevent themselves getting infected by coughing patients as they fight against the coronavirus outbreak accelerating across the city. The virus has hospitalized thousands of New Yorkers with a respiratory illness and killed at least 131 people.

In response, an assortment of city agencies, non-profit groups and small city-based factories came together over the weekend in a flurry of emails, phone calls and crosstown car rides. By Tuesday, production lines that had crafted sleek display stands for Nike sneakers were being retooled to churn out face shields, a thousand a day.

“Last week, we were ramping down, laying off staff, preparing to go into a shelter-at-home situation,” Bednark, the founder of Bednark Studio in the Brooklyn Navy Yard, said in an interview. “On Thursday, we were seeing there was going to be a need for medical supplies.”

His landlord, the non-profit Brooklyn Navy Yard Development Corporation, was in touch with city officials about how the historic manufacturing hub, where the U.S. military formerly built ships for over a century, could help address dire medical shortages.

“It quickly became evident that face shields, if quickly mobilized, was something we could actually bring to the front lines,” said Carl Rodrigues, the City Hall official appointed by Mayor Bill de Blasio last week to oversee a ramp-up in manufacturing in what Rodrigues called a “wartime effort.”

Health workers can use the face shields in some settings in lieu of the N95 respirator masks that have become a scarce commodity. New York Governor Andrew Cuomo said on Tuesday there was no more protective gear to be found for sale anywhere.

Bednark already had plenty of foam on his shop floor, to soften the shield where it wraps around a nurse’s forehead. His plastic suppliers agreed to open up on Saturday to give him the needed rolls of polyethylene terephthalate, a see-through polymer that should not fog over when nurses wipe it down with disinfectant.

Meanwhile, a Brooklyn Navy Yard security guard drove to the New York City Department of Health’s headquarters in Queens to borrow a face shield and a medical protective gown for Bednark and his fellow designers to copy, according to Navy Yard President David Ehrenberg.

Bednark, who normally makes sleek custom interior design components for restaurants and retailers, and a skeleton staff cut up their materials, ran some test assemblies, and, by about 9 p.m. on Saturday, had finished several prototypes. They emailed pictures over to health department officials.

“They loved it,” Bednark said.

The next day, he took the best prototype to the city’s health department headquarters, to be examined by an assistant health commissioner, who suggested only minor tweaks: Make the elastic headband adjustable, and soften the shield’s pointy corners.

By Sunday night, the design was approved. “Everything moved at lightning speed,” said Rodrigues, the City Hall official, who called the shields life savers.

The city’s non-profit Economic Development Corporation (EDC), which is controlled by the mayor, shared Bednark’s design specifications with other city factories.

EDC said it has heard from more than 500 businesses like Bednark’s offering resources to fight the outbreak.

“It’s very interesting to see how a pandemic can make you reconsider the value of a local production economy,” Lindsay Clinton, who oversees EDC’s innovation division, said in an interview.

Bednark aims to supply the city with 120,000 face shields by the end of the month, while MakerSpace and Adafruit Industries will make another 12,000 from Bednark’s design, EDC said.

“We’re mobilizing for our country in a time of need,” Bednark said, “just like the Navy Yard mobilized to build ships for World War Two.”