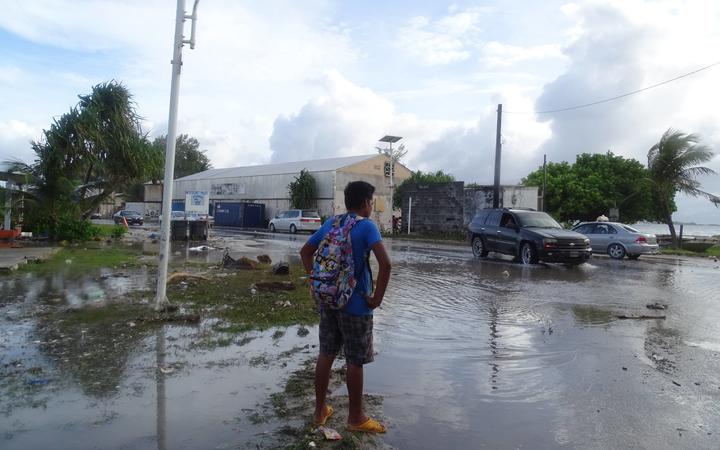 About 200 people evacuated their homes in the capital of the Marshall Islands on Wednesday after big waves caused ocean inundation around the low-lying atoll.

The waves combined with an otherwise unremarkable high tide on Wednesday, with more flooding feared for Thursday and Friday before the tides recede.

“The predicted tides were not particularly high, certainly not in the vicinity of the record high water levels from September of this year (that produced a series of ocean inundations in Majuro),” climate researcher Murray Ford, a senior lecturer in Geography at the University of Auckland, said Thursday.

“The tides and sea level rise component is not unusually high and not the direct cause of this flooding,” it was only a “contributing factor”, Dr Ford said.

“The key driver of this current inundation appears to be a large swell which has arrived from a more northerly direction than the typical trade wind swell.”

Although damage appeared modest around Majuro Atoll, people’s homes and yards were flooded with ocean water, roads at the international airport were temporarily impassible during peak flooding late afternoon Wednesday, and debris ranging from rocks and sand to garbage rolled onto roads and into yards requiring extensive clean up work.

The office of the government’s chief secretary, which coordinates disaster responses, is scheduled to join with officials from the Red Cross and the Environmental Protection Authority to conduct a damage assessment on Friday.

A buoy located in the ocean near Majuro monitors waves, providing researchers a wealth of oceanographic data for nearly 10 years.

“It is looking like these are the largest waves recorded by the buoy which has been in place on and off since April 2010,” Dr Ford said. Waves this week have been peaking in size at 4.82 meters (nearly 16 feet).

“This particular event would be best described as a large swell, meeting a high but not unusually high tide,” Dr Ford said. “No swell and these tidal levels wouldn’t have been a problem.”

Historically, the king tide period for the Marshall Islands is January to March.