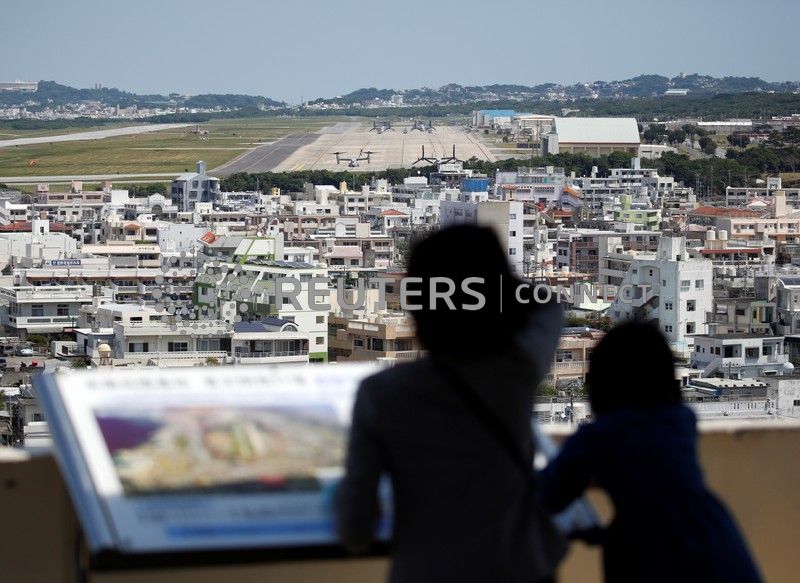 OKINAWA (Reuters) – A month after Jinshiro Motoyama’s five-day hunger strike forced a referendum over a new U.S. military runway on Japan’s island of Okinawa, he came to bid farewell to a knot of protesters trying to block trucks heading for the building site.

The referendum showed 70 percent of voters opposed expansion of a U.S. Marines base at Henoko on the island, but the vote was non-binding and Prime Minister Shinzo Abe’s government decided to forge ahead with a project long promised to Washington.

“It’s going to be a long battle,” said Motoyama, 27, adding that he was returning to Tokyo, the capital, to resume his study of foreign relations, because he needed to eventually get a job and earn a living.

“I will continue my studies and hope to help in the future. I hope I can encourage the next generation too,” he added, standing near a sign that urged protesters not to give up.

With leaders like Motoyama standing down and few islanders willing to protest at the base every day, despite the referendum’s overwhelming no vote, the plan to build the runway on coral reefs seems to face few obstacles.

The base, expected to be complete in five years, will host aircraft and troops from a residential area about 50 km (31 miles) south at the Futenma air station, which the United States and Japan agreed to close in 1996, after three U.S. servicemen raped a 12-year-old girl.

Many Japanese want the Marine units to leave altogether, to ease the burden on the militarized island.

Okinawa saw some of the bloodiest fighting in World War Two, and U.S. bases home to 50,000 U.S. citizens, among them 30,000 troops and civilian contractors, occupy about a fifth of the island.

But a rapid U.S. military departure is unlikely, because Washington wants a presence on the strategic island chain fringing the East China Sea as the power of neighbouring China grows.

At Henoko, protesters sat in the road to block trucks bringing sand for the new runway, a tactic repeated hundreds of times during more than a decade of demonstrations.

But they were outnumbered by security guards, who hauled away the protesters, many of them elderly, one by one.

“We know young people like Motoyama worked hard to make the referendum happen,” said one of them, 73-year-old Masaru Shiroyama. “Our biggest concern is they will lose heart and give up.”

He vowed not to give up, calling the referendum “a starting point for this new battle in Okinawa.”

As a U.S. tilt-rotor Osprey transport flew overhead, Motoyama looked up, recalling how the roar of military jets often woke him as a schoolboy, and made it hard to play baseball too.

“You can’t hear the ball hit the bat, which can be dangerous, if you’re an outfielder like I was.”