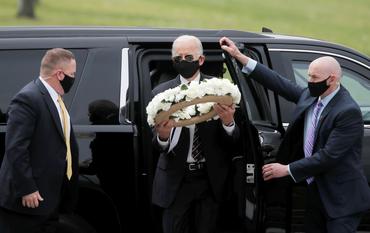 NEW CASTLE, Delaware (Reuters) – Former Vice President Joe Biden on Monday made his first public appearance outside his Delaware home since quarantining himself due to the coronavirus pandemic 10 weeks ago, visiting a nearby veterans memorial to mark the U.S. Memorial Day holiday.

Biden, the prospective Democratic presidential nominee, and his wife, Jill, both wearing black masks, laid a wreath of white roses at the memorial for U.S. military personnel who fought in World War Two and the Korean War.

“It feels good to be out of my house,” Biden told reporters, his speech slightly muffled by the mask. Maintaining his distance, he saluted about a dozen veterans and other onlookers standing a few yards away and thanked them for their service.

Biden has been holding virtual campaign events ahead of the Nov. 3 election from his house in Wilmington ever since much of the country was forced to stay largely at home to curb the spread of the coronavirus.

While President Donald Trump’s activities have also been restricted, he has gradually left the confines of the White House in recent weeks to visit the battleground states of Arizona, Michigan and Pennsylvania in his presidential capacity.

Trump played golf this weekend for the first time since he declared a national emergency in March, drawing criticism from Biden and others as the U.S. death toll from the virus neared 100,000.

“The presidency is about a lot more than tweeting from your golf cart,” Biden posted on Twitter on Sunday.

Even as some of Biden’s donors and supporters have fretted over his low profile, he has consistently kept an edge over Trump in national polls as the Republican president’s handling of the crisis causes his public approval ratings to slip.