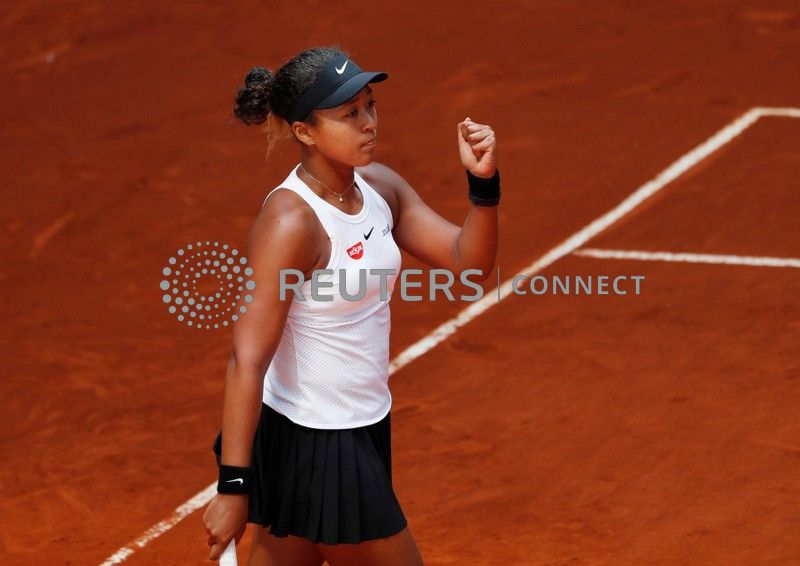 MADRID (Reuters) – World number one Naomi Osaka withstood a firm test from unseeded Spaniard Sara Sorribes Tormo to reach the last 16 of the Madrid Open on Tuesday while Simona Halep also advanced but Angelique Kerber’s tournament was ended by an ankle injury.

The Japanese was taken to a tiebreak in the first set by Sorribes Tormo, ranked 73 in the world, and then lost the second before overpowering her opponent for a 7-6(5) 3-6 6-0 victory.

The Australian and U.S. Open champion, playing in her first tournament since being forced to withdraw from the Stuttgart semi-finals last month due to injury, struggled for consistency, frequently following impressive winners with unforced errors.

Osaka was broken to love in the second set, one of three service games she lost, but came roaring back in the decider to set up a last-16 meeting with Aliaksandra Sasnovich of Belarus.

“This match was on my racket because she (Sorribes Tormo) doesn’t really have the game. She wasn’t going for winners and I felt either the point was ended by me making an unforced error, or me making a winner,” Osaka told a news conference.

“I feel like in the first set, I got a bit lucky there. In the second set I got a little bit unfocused and then in the third set I went zombie mode and then just thought of everything that I had to do to win.”

Romania’s twice Madrid winner Halep beat Britain’s Johanna Konta 7-5 6-1 and will play Viktoria Kuzmova in the next round, while France’s Caroline Garcia set up a meeting with last year’s champion Petra Kvitova after beating Sorana Cirstea 6-4 3-6 6-1.

Wimbledon champion Kerber had to return home to Germany for medical treatment after hurting her ankle in a practice session ahead of her match with Petra Martic, who got a walkover into the round of 16 where she faces fellow Croat Donna Vekic.