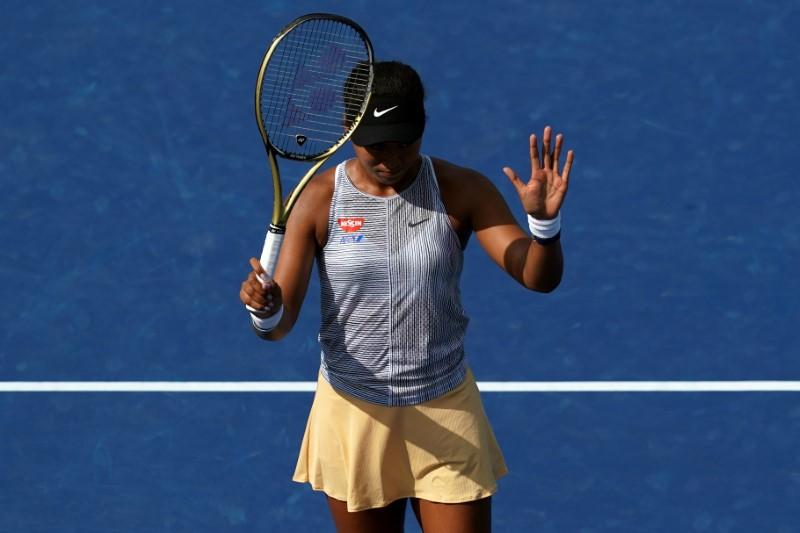 (Reuters) – World number one Naomi Osaka retired from the Cincinnati Masters with an apparent knee injury on Friday, less than two weeks before the start of her U.S. Open title defence.

Osaka was trailing American Sofia Kenin in the third set of their quarter-final in Cincinnati when she sought treatment on her left knee.

After briefly returning to play, Osaka retired with Kenin leading 6-4 1-6 2-0.

The Japanese star’s withdrawal leaves both of the 2018 U.S. Open finalists having retired from the tournament.

American Serena Williams withdrew with back problems after also pulling out from the final of the previous week’s Rogers Cup with similar problems.

Kenin said in a court-side interview: “This isn’t the way I wanted to win.

“I wish Naomi a speedy recovery so she can get ready for the U.S. Open. She’s a great player and I have a lot of respect for her.”

Barty will face Russian veteran Svetlana Kuznetsova in Saturday’s semi-finals and victory would return her to top of the world rankings.

She surged to a 4-1 lead in the first set before the Greek took control with a string of backhand winners.

The Australian cleaned up her game in the second set, however, rediscovering the backhand slice that had deserted her in the opener.

“It was important for me at the start of the second set to go back to basics and what worked before,” the 23-year-old Barty said.

“I had to serve well, and not give her too many looks at second serves. I tried to bring in my slice to change the tempo of the match.”

Kuznetsova outlasted Czech third seed Karolina Pliskova 3-6 7-6(2) 6-3, having been a set down with her opponent serving for the match.