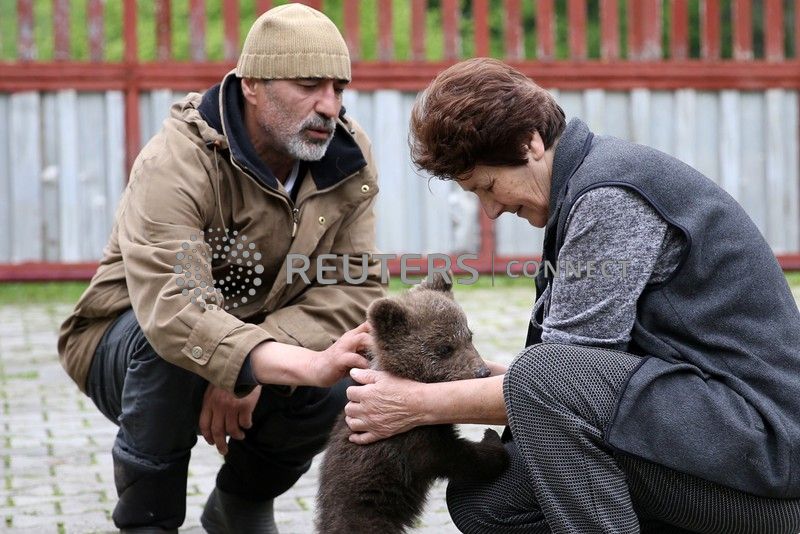 Zakir Becar and his mother Sija play with an orphaned baby bear named "Aida" in front of their house in Gunjani village near Sarajevo, Bosnia and Herzegovina May 16, 2019. Picture is taken May 16, 2019. REUTERS/Dado Ruvic

GUNJANI, Bosnia (Reuters) – In a mountain village in Bosnia, the Becars are making friends with a new addition to their family – an orphaned baby bear who fled nearby woods in search of food and shelter.

The two-month-old female cub first showed up near Gunjani last weekend but locals, fearing her mother might come looking for her, directed her away from the village.

The next morning she came back and the Becars decided to take care of her, naming her Aida.

“When we first saw her, she couldn’t walk properly and was probably starving. I gave her some milk and we brought her here,” said Sija Becar.

Contented but still a little unsteady on her feet, Aida ran in circles around the family’s courtyard before allowing herself to be stroked by Sija and her son Zakir.

The villagers say Aida’s mother was probably killed by poachers, who often prey on Bosnia’s population of around 850 brown bears.

Bear hunting is forbidden in the autonomous Bosniak-Croat Federation where Aida was found, but permitted in the country’s other half, the Serb Republic.

Without her mother to protect her, Aida has no chance of surviving in the wild, and the Becars have reluctantly agreed for her to be transferred to Sarajevo Zoo, where she can receive the more expert care she needs to fully rebuild her strength.

“We’ve got used to the baby bear, so we’ll be sorry when she leaves,” Sija said.

Muhamed Hodzic, the Federation’s chief forestry inspector, said Aida was the third cub to have been rescued in the area in recent years after poachers killed their mother.

“This is a grand animal that lives in our forests but unfortunately (such cubs) will never again be able to return to nature where they truly belong,” he said.