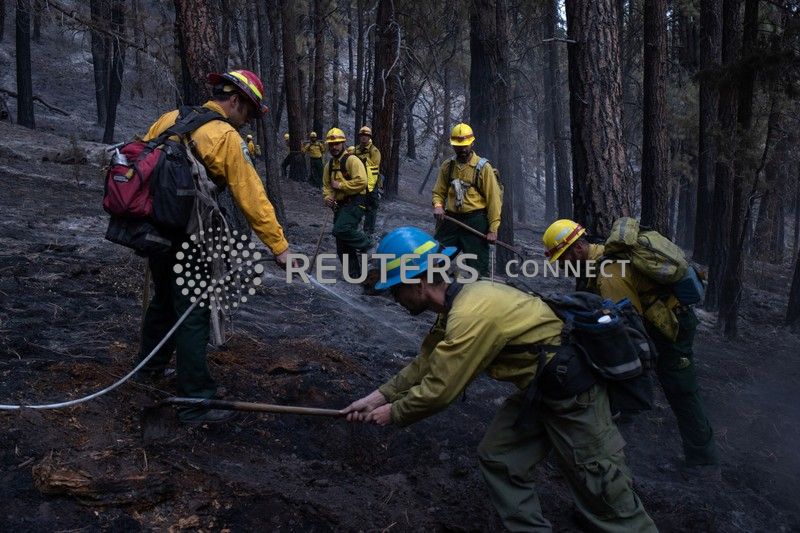 Inmates from Warner Creek Correctional Facility, working as firefighters, look on as they are led by Ryan Webb, a crew boss with the Oregon Department of Forestry, wearing a blue hat, and David Halbleib, the fire crew supervisor and correctional officer, as the crew tries to mop up hotspots from the Brattain Fire, near Paisley, Oregon, U.S., September 19, 2020. REUTERS/Adrees Latif

PAISLEY, Ore. (Reuters) – In the flames, they are finding redemption.

The 10 Oregon prisoners carry chainsaws, axes, shovels and hoes into the biggest wildfires the state has seen in a century.

Banding together, they form lines in the forest and trudge up the steep ashen slopes of the Cascade Mountains, hunting embers that could reignite flames.

The men are part of a seven-decade-old state-run program that aims to do two basic things: Rehabilitate prisoners by teaching them a trade, and provide extra boots on the ground for intense wildfire seasons.

A dozen such crews have worked fires in Oregon this month, which has seen over 1 million acres burn and nine people die during this year’s wildfire season.

The men in a crew working the forested mountains near Paisley, Oregon, last week were mostly young and fit. They had to be to scale the punishing terrain. Ankle-deep ash slicked hills and meant the men slipped two steps back for each stride forward.

Many were violent offenders – armed robberies and assaults were common convictions – but none were in prison for homicide or sexual crimes. Most say they have personalities that feed off adrenaline. The highs that crime brought landed them in jail. All say they are blessed to have found a legal, alternative rush.

“This gives us a different opportunity, rather than going back to something that we already know, which is guns, gangs, violence and drugs,” said Eddie Correia, 36, who is about halfway through his six-year sentence for an assault conviction.

Correia’s crew had 10 prisoners who spent their days fighting fires and another 10 who slept and worked in an Oregon Department of Forestry support camp, picking up trash, serving food and providing other services. They earn $6 a day for their labor.

The men wake at 6:30 a.m. each day in Oregon’s cold early fall dawn. They dress in sweatshirts emblazoned with the word INMATE and make their way to a makeshift breakfast area, where they sip coffee, stamp their feet to ward off the chill and chat about the chore that awaits them.

Around them, the flat green pastures of the Fremont National Forest run right up to the fire-devastated mountains, where billows of white smoke float upward from the flames.

The men prep their equipment before heading out, using files to sharpen axes and triple checking their bright yellow backpacks to make sure all their gear is there.

Armando Gomez-Zacarias, 24, who has just over three years left on a 7-1/2 year sentence for robbery, said the work gave him “a nice adrenaline rush.”

The physical toll, he emphasized, was brutal.

“It’s like running 100 laps on the track without stopping and carrying 50 pounds of weight,” he said.

Correia, who has fought fires in the program since 2018 and wants to continue after he is released from jail, said the strenuous work and danger fostered a camaraderie impossible to replicate inside prison walls.

Those connections and sense of purpose, he said, “have helped me deal with a lot of my own demons.”