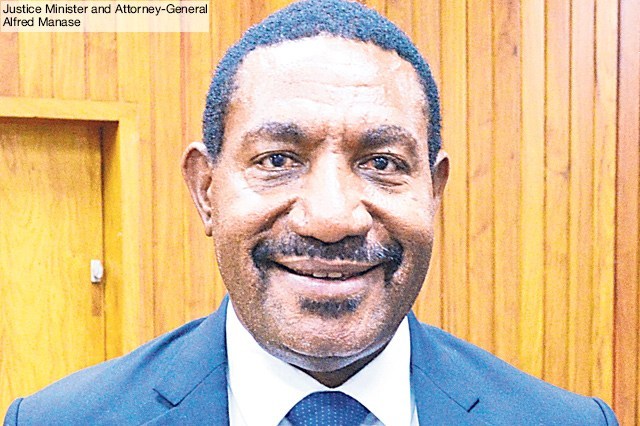 PORT MORESBY, 20 MAY 2019 (THE NATIONAL) – The State has requested the Supreme Court of Papua New Guinea for an urgent hearing of an application filed on Wednesday to stay the processing of the Opposition’s no-confidence motion in Parliament.

The application was filed by Twivey Lawyers on behalf of the State at the Supreme Court registry.

Justice Minister and Attorney-General Alfred Manase, said the motion filed by the Opposition, if allowed to go through the parliamentary process, could be in contempt of court because there was a reference relating to the issue pending in the Supreme Court.

“I took this course of action after receiving a letter from the Speaker Job Pomat advising that he is in receipt of the notice of motion for the vote of no confidence,” he said.

“I have sought legal advice and formed the view that I should apply for a stay on a vote on the no-confidence motion by Parliament.

“In my view the notice of motion would be contemptuous of the Supreme Court which is yet to answer critical constitutional questions concerning the notice of a motion of no confidence which are pending before it.”

He said it arose from Supreme Court’s application of Section 145 of the Constitution and Parliament’s Standing Orders relating to the vote of no confidence against the prime minister.

“I know that many people may disagree with this court of action that I have taken,” Manase said.

“However, I would like our people to understand that it is my duty to ensure that the rule of law is respected and observed at all times, even by parliament,” he said.

He said the court was yet to give a date on when it could be heard.

Parliament resumes its sitting on May 28.

The Opposition motion was going to be vetted by Parliament’s private members committee on May 29, and put on the notice paper if approved the day after. It then has to go through a seven-day period before it can tabled and moved.

Manase said the Supreme Court reference, filed by his predecessor Davis Steven last year, was to clearly demarcate the roles and functions of the three arms of government, and more particularly how far the courts could go in interpreting the constitution to preserve the principal of the separation of powers between the three arms.

“Once we obtain the answers from the Supreme Court, the Parliament is free to conduct its affairs without the fear of interference by the third arm (judiciary) of the government,” he said.

“Parliament is also able to proceed with the motion of no confidence with certainty and confidence.

He called on MPs and the people to respect the court process and allow the Supreme Court to conduct its business without fear or favour.

“This is not about numbers and the vote of no confidence. It’s about preserving the integrity of the different institutions which is critical, said Manase.