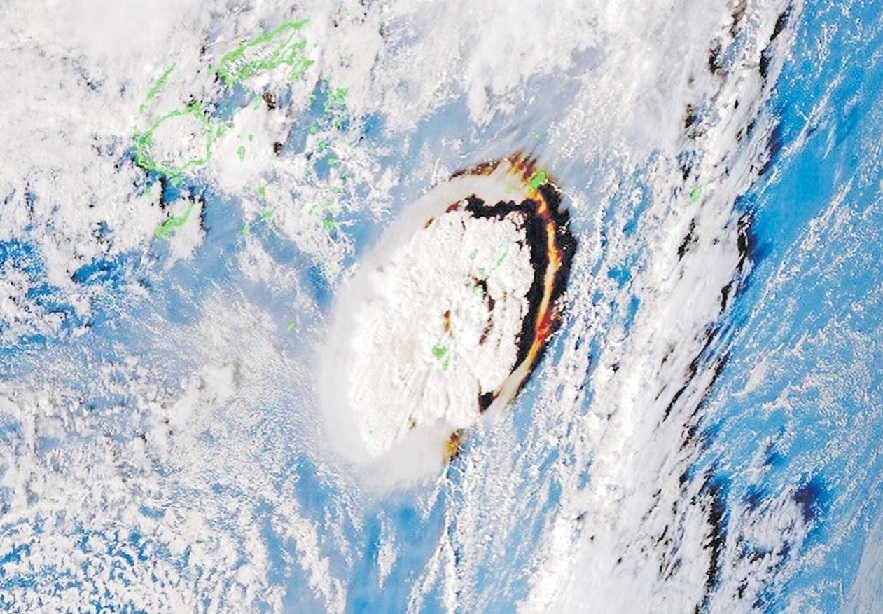 Communication with Tonga remains intermittent after the volcanic eruption severed the kingdom’s undersea cable connection with the rest of the world.

The lack of a backup service has reignited debate over previous government decisions which have been the subject of controversy and court cases. It could be weeks before services are fully restored.

The 827km cable between Tonga and Fiji was cut when the Hunga-Tonga-Hunga-Ha’apai volcano exploded.

The break is located 37km from the capital, Nuku’alofa. A cable connecting Tongatapu to other islands in the archipelago has been severed about 47km from Nuku’alofa.

A submarine cable repair ship is expected to sail from Papua New Guinea in the next few days. Some communication with Tonga is possible via satellite.

It is understood some people have been able to use the University of the South Pacifi c’s satellite connection to contact New Zealand from Ha’apai.

A New Zealand resident in Mangawhai north of Auckland, has been in contact with his colleagues in Tonga via satellite text phone, 1News reported this morning.

The government of the late ‘Akilisi Pohiva believed the best option was for Tonga to spend its money in building a satellite back up service.

The Pohiva government made a 15-year deal with Kacific to establish a satellite back up link, but this was cancelled by the Tu’ionetoa government.

As Kaniva News reported in June last year, Kacific Broadband Satellites International Ltd provided emergency broadband services to Tonga when the undersea cable was severed by a ship’s anchor in 2019.

The Tongan government and its subsidiary Tonga Satellite Ltd later signed an agreement with Kacific for the supply of satellite broadband for a fee of US$5.76 million, which was due on June 15, 2019.

The fee was not paid and the company took Tonga to court in Singapore to enforce payment of the debt.

The government then tried to take TSL off the kingdom’s company registry. This was overturned by the Tongan Supreme Court.

“We came to Tonga’s aid during its hour of need,” company CEO Christian Patouraux said at the time.

“It is deeply disappointing that Kacific has to undertake legal proceedings.

“The Tongan Government has benefited from millions of dollars of payments from international aid and infrastructure agencies to fund e-government initiatives and strengthen digital access over the last 10 years.”

The current Prime Minister, Siaosi Sovaleni was at the centre of a controversial deal with internet provider Hawaiki when he was Minister of Environment and Communications. Sovaleni signed a TOP$50 million ($F46.90 million) contract.

Tonga paid TOP$6 million ($F5.64 million) so that the Hawaiki cable connecting New Zealand and Australia to Hawai’i and Los Angeles was connected to the Vava’u fibre cable in Tonga.

However, in 2019 Tonga Cable Ltd (TCL) Director Paula Piveni Piukala and Minister of Trade and Economic Development Tu’i Uata were sent to Auckland to seek advice on the deal.

Uata said TCL had questioned whether the large sums being paid from taxpayers’ money were justified. Piukala said at the time it “did not make sense” to pay such a large amount of money just in case the cable might be damaged in the future.

Tonga also had an agreement with French company Alcatel for the provision of a fibre optic cable system connecting Nuku’alofa and Vava’u with a branch to Ha’apai.

The World Bank has funded $50 million for Tonga’s high-speed internet cable which was launched in 2013. Tonga asked the Bank to also fund a backup, or redundancy, cable but the Bank said it was not financially viable.

 SANJESHNI KUMAR is a multimedia journalist from Fiji. She is working with Pacific Island News Association (PINA) for the Pasifika Environews.

The views expressed in this article are the author’s.