Opinion: Tuvunia’s love for the ocean 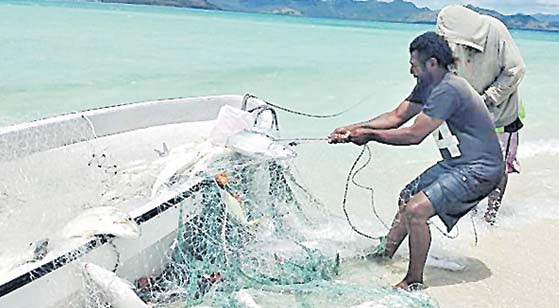 Fishermen of Kavewa on a typical fishing day using nets to catch yawa or milkfish.Picture: SUPPLIED

Give Iliapi Tuvunia a pen and paper and he’d probably write a book about his experiences as a skilled fisherman and seaman. The 43-year-old father of four has known fishing all his life. He hails from the island of Kavewa, in Dogotoki, Macuata, and no, he is not a traditional fisher or Gonedau.

Iliapi’s dad is the chief in the village and since he lives on an island known for its abundance of fish – fishing is a way of life. “We weren’t taught how to fi sh. This is something that comes naturally for us as we just watch and follow what our parents do.

For us it was not formal training and most of the things I learn was through watching my father,” he said. “Going back to the village and straight to fishing was my choice and that has been my source of living for the last 20 plus years, except for a 5-year stint working for a micro-finance project,” said Iliapi.

Kavewa is all of us

Life for fishermen on his island is difficult now as they have to go farther from their usual fishing areas and added to that the unpredictable weather that they face each day. They

have also seen a decline in the top fish species that they used to catch from the reef which has made them resort to selling them in bundles.

“I remember when we used to sell fish in those days. They were only sold in kilos and graded as A and B and we would fetch more money from that. These were mostly reef fishes like kawakawa, donu, sevaseva and others.

“When sold in kilos, parrot fish would only fetch us $4 to $5 a kilo otherwise if we string them up with other fi sh in 8 to 9 fi sh in a bundle, we could get $15 to $20 a bundle from middlemen in Labasa.

“Before, you could just go out in a night and your catch would be enough to buy what you need for the week. Nowadays, I am only able to sell about 10 bundles a week, but in good weather it could go up to 20 bundles and money from that we buy rice, flour and other small necessities.”

After much discussions to revive their reefs, the district of Dogotuki agreed to ban night spearfishing and the leaving of nets overnight.

The villagers of Kavewa also set up a tabu in front of the little island that is facing them.

“But while we in the Dogotuki district have banned night spearfishing and also leaving nets overnight, fishermen from Labasa and those from other islands are coming in at night or on Sundays to spearfish in our fishing grounds. That’s the downside of our efforts to revive our fishing grounds,” said Iliapi.

So, they needed to enforce the rules on outsiders.

“But to monitor our reefs, we need fuel and we cannot afford to do that all the time, so when we meet these poachers, we try to ask them to respect the ban on night fishing. We had discussed giving them fishing licences to assist us, but most were against it as this was our major source of income.

“We have set aside a tabu in our qoliqoli which is in front of Katawaqa Island to make it easier for us to monitor as our last tabu area was usually exploited by divers.”

National talanoa is the way forward

These challenges are why Iliapi is now stepping up to be a 4FJ Fish Smart champion. The 4FJ Fish Smart campaign is working to empower all communities in Fiji with better fishing practices, that help revive Fiji’s fishing grounds.

In addition, the campaign is asking everyone in urban areas to avoid undersize fish, which is a national management measure to help ensure enough fish are breeding.

“The campaign is sharing the lessons from communities across Fiji, along with expert advice, to create a national talaonoa on reviving fish stocks,” said Mafa Qiolele, program manager at cChange, the organsation that is co-ordinating the multi-partner and multi-sector campaign Qiolele said Iliapi’s story illustrates that it will take leadership inside our communities but also support outside the communities so the sacrifices places such as Kavewa make is not lost if outsiders don’t respect their rules.

“In Fiji, we have a practice called solesolevaki, which is based on community members working together to help each other thrive,” Qiolele said.

“This campaign is trying to bring solesolevaki to the national level, to revive our fishing grounds for everyone by working together.” And the campaign’s power lies in the everyday champions like Iliapi, who knows his fishing grounds better than anyone, she added.

For his part, Iliapi is pleading with other fi shermen to obey community rules, and also for people not to buy or sell undersized fish to market.

And he hopes his knowledge of the sea will convince people of the importance of action. “Let us always think of our future and the outcome of our actions today will define our source of life and income tomorrow.”

 ALUMECI NAKEKE is a communications officer at cChange. The views expressed are the author’s and do not reflect the views of this newspaper