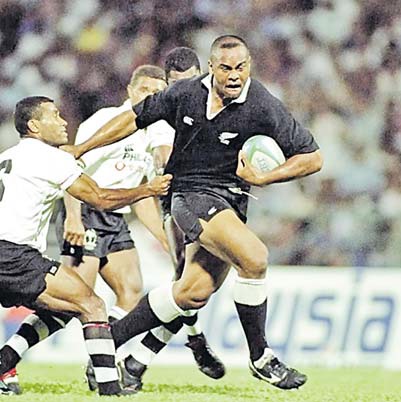 The shift from Wellington to Hamilton has proven to be fantastic in terms of crowd and getting a party atmosphere, but for me the yellow seats at the Cake Tin bring back epic memories of sevens battles in the windy capital of New Zealand.

Way back in 1999 when the International Rugby Board (IRB) decided to have a WRSS circuit, the rivalry between Fiji and NZ lived up to expectation and revived sweet memories of the early days from HK. Battles between Fiji and NZ have been world class.

The Fiji team understands 7s rugby so well and the NZ team has been an organised team. For me memories from the Cake Tin and the windy city of Wellington can never be erased.

Fans will remember that when the IRB 7s series started it was all Fiji versus NZ. Both teams had bagged five wins each. NZ had won in Dubai, Uruguay, Suva, Hong Kong and Paris while the Fijians won in South Africa, Argentina, Wellington, Japan and Brisbane.

However, as Fiji slipped in Paris, the All Blacks 7s took full advantage and won the Paris 7s to win the inaugural IRB 7s series circuit with 186 points. Fiji trailed the ABs by six points.

The Wellington 7s lives in the memory of many rugby fans as our boys won the inaugural 7s tournament hosted by the capital city in style after demolishing a star-studded NZ outfit coached by the greatest coach in the history of 7s Sir Gordon Tietjens, and it was always jubilant to bring the cup from the heart of NZ. Before the 2000 Wellington 7s Fiji and traditional rivals NZ had met on four occasions.

The combination of the late 7s guru Master Epeli Lagiloa (manager) and Peni Veidreyaki (coach) was stunning as they named a powerful side for the battle.

I had an opportunity to have a conversation with Veidreyaki and two key players – Delasau and Satala. Peni had a lot to share as he guided Fiji to our first Wellington 7s cup. According to Peni, the WRSS was new to everyone, and he was elated to be selected as the head coach ahead of the late Tukiti Vesikula and Rupeni Ravonu.

He was glad that he had been given the green light by Paula Cavu to select his own squad. The late Epeli Lagiloa and Peni had attended Lelean Memorial. Master Lagiloa was his senior and was more qualifi ed as a coach and as a trainer.

Peni gave credit to Master Lagiloa for humbling himself and for doing his job as the team manager. Peni shared how he worked hard in NZ to get Marika Vunibaka’s release from the Crusaders, and how he had a conversation with his players, and then had to drop Jo Vunisa.

Vunibaka, according to Peni, trained with the boys during the captain’s run, but because he had 7s knowledge it did not take him long to get acclimatised to the team’s expectation. Peni described the atmosphere as fantastic, thrilling and exciting – a huge, passionate and patriotic crowd gathered for the two-day tournament in the capital. He said that he had been to Dubai and Africa, but the atmosphere in Wellington was different, and it challenged them to deliver something sensational.

The players were disciplined, skillful and had a good relationship with each other. Fiji started strongly in pool play demolishing PNG (54-0), USA (47-10) and Argentina (35-12). In the cup-quarters Fiji outclassed Tonga (47-7) before belting Samoa (47-12) in the cupsemis.

The stage was set for a fierce and exciting final and the hosts with a huge crowd backing looked hot favourites.

NZ laced with star players like Mils Muliaina, Justin Wilson, Caleb Ralph, Craig De Goldie, Eric Rush, Karl Te Nana, the late Jonah Lomu, Christian Cullen, Amasio Valence Raoma, Jared Going and Tony Monaghan were favourites to win at home. Australian referee Stuart Dickinson was given the task of refereeing the final and he had a hell of a time as the match built to its climax.

Veteran commentator and my alltime favourite Keith Quinn, who was joined by former All Blacks star Dallas Seymour in the commentary booth, was all hyped up to cover the match. Perhaps the turning point came too early as the late Lomu tried to break Fiji’s defence and met Delasau. Lomu and Delasau were classified as the two big men of world rugby. Jonah’s jersey was ripped apart by Vunibaka and Delasau.

I specifically asked Delasau how he had done the impossible, and Delasau shared that it was not something that he had planned. Sharing his experiences from Ba, Delasau said winning the Wellington 7s in 2000 was one of his best memories from the playing field.

He shared that he had heard about Lomu and Cullen, and that they were world class players. According to Delasau, while warming up, he had a glance of Lomu, whom he considered his idol and Cullen and he was determined to beat both of them and win the prestigious title. He shared his experiences with the Nadi Cavaliers team, which had toured Argentina, Chile and Uruguay, and lost to Lomu’s All Blacks 7s team in the quarterfinal.

He said it was hard for him to defend against Lomu, and while preparing for the Wellington 7s, he had done his homework. Delasau said once Lomu ran past his opponent, his footsteps could he heard on the turf. He shared that he had planned with Vunibaka to let Lomu run inside, and go for the chase. The ripping of Lomu’s jersey was not planned, but it showed the enormous strength that Lomu had, and that it was always going to be a mammoth task bringing him down.

Delasau said when he pulled Lomu’s jersey, he fell down, and because Lomu did not come down, his jersey got ripped apart.

The Fijians hammered NZ with bonecrunching tackles which resulted in NZ dropping balls and giving away possession. Fero went down as Stuart Dickinson called Serevi and Rush and asked the sides to calm down, play the football and keep their discipline.

Serevi’s pass found Vunibaka who made his intentions known early as he left the NZ defenders in their wake and dashed towards the corner. Robbie Deans watched as Fiji raced to a (5-0) lead. Muliaina broke from his own half, and the Fijians were caught napping by the NZ counter attack.

Serevi had to defend our try-line against Muliaina, Ralph and Monaghan and a late help from Seta was not enough as Mils dotted in the corner. Monaghan added the extras, bringing a round of applause from the huge crowd as the hosts took the lead (7-5). The half time hooter went.

Seta received a pass from Vunibaka who offl oaded to Delasau and on the stroke of half-time Delasau broke thousands of Kiwi hearts as he sizzled between two NZ defenders to give Fiji the 12-7 lead at half-time. This is what Keith had to say: “Delasau skins through and he is away.

So Fiji will take the lead at half-time. Delasau – what a tremendous player this young man is. He goes in for his 64th try in the series.”

Tietjens tried to spark his boys who were stung by Fiji in the tremendous Wellington atmosphere. Ten more minutes of two wonderful days of 7s rugby and the crowd was at the edge of their seat. Delasau received a pass and dazzled past Karl Te Nana to set up Vunibaka for Fiji’s third try. Scores (17-7) in favour of Fiji! Fiji played with a lot of confidence as the hosts stumbled.

Even Tietjens looked worried from the sideline. Fiji’s defence held on to the NZ onslaught and Caleb Ralph was yellow carded for shoulder charge. With six minutes to play, Cullen replaced Jonah. However, the tackle made on Cullen by The Stretcher (Viliame Satala) ended his time at the Cake Tin and he was replaced by Raoma.

Satala had so much to share about his tackle on Cullen. He said he had broken his shoulder the previous year and that is why he had a bandage tied around his shoulder.

He shared that our boys had expected a tough outing against the hosts, but they were confident of winning. When asked about the tackle, Bill said: “He wasn’t expecting it.” Bill added that if he had not tackled Cullen, the hosts would have scored a try.

The flying feet of Delasau then added misery to the hosts as his try extended Fiji’s lead (24-7). This is what Keith had to say: “Serevi now Delasau they got two covering him. He is looking for space. And he is away to score, chased all the way by Craig de Goldi”.

NZ had given Fiji too much space and they paid the price. NZ tried desperately to please their fans and their country and the hosts pulled one back (try to Karl Te Nana) with seconds remaining, but it was not enough and Fiji created history by winning the inaugural Wellington 7s (24-14). Some consolation, however, for the hosts as Tony Monaghan was given the tournament’s Best Player Award. Keith Quinn summed up Fiji’s win with these words: “And it is over! Great performance and deserving winners, Fiji!” Serevi was hoisted on Tomasi Cama Senior’s shoulders as fans celebrated wildly. Back home Fijians were in frenzy as the Kiwis walked away from the stadium bitterly.

The 2000 Wellington 7s final remains one of my best 7s finals. The way we beat the hosts became the talking point for many over the tanoa. Isa, the glorious days that left us mesmerised! For Delasau, Bill and Peni, the win was very sweet, for they conquered the enemy, laced with rugby names, in their own background.

I conclude by paying tribute to Jonah Lomu, Temesia Kaumaia and Epeli Lagiloa! May their souls rest high! A beautiful memory from the Cake Tin.