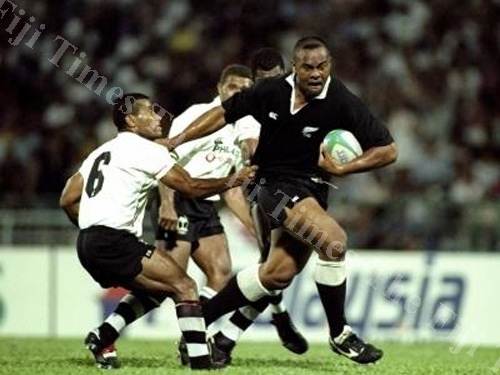 The 1995 Rugby World Cup was held for the first time ever in the rainbow nation of South Africa, who were the host nation.

The tournament itself was glittered with established and emerging rugby superstars such as, Jonah Lomu, Ruben Kruger, Chester Williams, Joost van der Westhuizen, James Small and Joel Stransky to name a few.

It has been 25 years since that famous tournament took place and what a spectacle of colour, flamboyance and national pride there was during the event.

Rugby fever hit South Africa with even the late President, Nelson Mandela, coming out to show his support for the rugby world. Ultimately after the knockout stages of the competition there stood only two mighty heavyweight contenders to dual it out in the final that was of course South Africa and New Zealand affectionately known as The Springboks and The All Blacks.

The tournament itself was fantastic as South Africa were the eventual winners after a mighty battle which went into extra time, but 25 years on I look at the rugby stars that competed so hard and so fiercely for their nations with a sense of sadness that comes across my heart as I remember so many fallen heroes.

This 1995 World Cup winning team was dubbed the best ever Springbok side and the New Zealand team were also dubbed a great team.

What has been particularly difficult to comprehend is the fact that each and every one of these proud and hard-hitting rugby stars I have mentioned above have all passed away except for Joel Stransky, the hero of the World Cup final who scored all his teams’ points and the winning drop goal.

These star players have been plagued with cruel medical conditions which have robbed them of enjoying a long and fruitful life and left their wives and children alone to face the uphill struggles of life.

I have met and interviewed all of these players and they were as confident, striking and imposing off the rugby field as they were on it.

Today 25 years on, I honour all the players who gave their all to make the Rugby World Cup of 1995 as enjoyable as it was.

First up is Ruben Kruger, the South African blind side flanker and stand out player of the tournament. He was cruelly struck down with brain cancer and died at the age of 39. March 30, 1970 to January 27, 2010 RIP

Joost van der Westhuizen, the six foot two inches scrum half, who many regard as the greatest number 9 in rugby history. He past away at age 45 from motor neurone disease, this disease left him in a wheelchair and unable to speak for over five years. February 20, 1971 to February 6, 2017 RIP

Jonah Lomu, the six feet five inches, 125 kilo stand out All Black winger. The  only rugby player to ever transcend the sport and become an icon across a large spectrum of society passed away from a kidney ailment that had slowly, but surely worn him down.He was 40 years old. May 12, 1975 to November 18, 2015 RIP

James Small, the robust and sturdy Springbok winger played a key role during the World Cup campaign and was a household name in South Africa. He passed away from a heart attack at the age of 50. February 10, 1969 to July 10, 2019 RIP

Chester Williams, who was the darling and face of South African rugby. He was a superb winger with pace and a defensive genius against much bigger opposition. He passed away from a heart attack at the age of 49. August 8, 1970 to September 6, 2019 RIP

To round off the tragedies of this famous clash of the titans even the victorious world cup winning Springbok coach Kitch Christie, who remained unbeaten during his tenure as Springbok rugby coach between 1994 and 1996, including leading the team to a record 14 consecutive victories had to succumb to leukemia. He was 58 years old. January 31, 1940 to April 22, 1998 RIP

What a sad turn of events for these once mighty warriors who ruled the rugby field with their speed, skill, strength and passion for the game. They gave it their all for the sport we all love so much called rugby.

 Ajay Bhai Amrit is a freelance writer. The views expressed in this article are his and does not necessarily reflect the views shared by this newspaper.