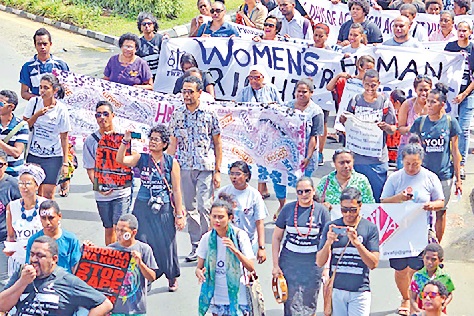 Advocates with their placards and banners march along the streets of Suva during the 16 Days of Activism Against Gender-Based Violence campaign in 2015. Picture: FILE/JONACANI LALAKOBAU

The COVID-19 pandemic affected lives, plagued economies, left millions without jobs and income and deprived us of social relations as we used to know.

In this context, one issue found fertile soil to dramatically grow — violence against women and girls.

In Fiji alone, there was a recorded 606 per cent increase in calls to the national Domestic Violence helpline between February and April, 2020, the period during which initial COVID-19 lockdowns occurred.

According to the latest estimates, nearly one in three women aged 15 years and older around the world have been subjected to physical or sexual violence by an intimate partner, non-partner or both, at least once in their lifetime.

Here in the Pacific region, numbers rise alarmingly, with nearly two in three women who have reported experiencing physical or sexual violence in their lifetime.

People often argue that gender-based violence is a private issue to be solved within people’s homes, within their own private houses.

Evidence shows that violence against women and girls is a violation of human rights that generates huge social and economic costs not only for women and their families, but also for communities, businesses and societies.

Primarily, violence and control over women significantly impede women’s ability to fulfil their potential, and if women cannot fully participate in education, employment and civic life, our goal of poverty reduction cannot be fulfilled.

Furthermore, responding to genderbased violence drains time and resources from social services, and the justice and health care systems. In this disturbing picture, protecting women and girls from abuse is more than ever a priority.

We must use this occasion to address the daunting challenge by using a whole of a society approach. While we are fully aware that our efforts to prevent and eliminate violence against women and girls need to continue throughout the year, we dedicate 16 Days of Activism against Gender-based Violence (GBV), an international campaign that place each year, with the aim generating wide reaching impact across the globe by vigorously advocating for change. The campaign was originated by activists in 1991 and this year marks its 30th anniversary.

As in previous years, orange will be used to represent a brighter future, free from violence against women and girls. At the United Nations Development Programme (UNDP), we are committed to prioritising funding for essential services that include GBV prevention and response in COVID-19 fiscal stimulus packages.

We believe that prevention and GBV response actions must involve women, men, young girls and boys together, where men participation in prevention initiatives is a way to promote discussion around power dynamics and challenge the Pacific “patriarchal culture”.

When it comes to gender inequality, such as the case of COVID-19, climate crisis is amplifying gender disparities and reducing protective factors that work to prevent violence against women and girls.

In our work to fight GBV, the international community, governments and civil society must begin to move at the intersection of gender and climate justice in the Pacific.

This means working together as allies to change our hearts and minds, engaging with national-level institutions and partners to galvanise support for significant policy changes.

Ultimately, to inform inclusive actions, we need more gender-disaggregated data for the Pacific region, to ensure the most marginalised groups are put at the core of the project goal. Otherwise, their realities and specific needs are likely to remain invisible, as it often happens with violence against women and girls.

Powered by grassroots organisations globally, the 16 Days of Activism against GBV Campaign is an opportunity to leverage the renewed sense of urgency COVID- 19 has created and propel concrete action against gender-based violence. The promises of the Sustainable Development Goals cannot be fulfilled without ending violence against women and girls.

As we look forward to building better from COVID-19, we have the chance to create a society free of violence for women and girls.

We are called to prevent and respond to gender-based violence to ensure we leave for future generations, a society where people can enjoy human rights and participate and contribute to an inclusive development agenda.

It is the right thing to do and it is our duty. Let us paint the world bright orange during the upcoming 16 Days Campaign and during every other day.