OPINION: Compacts of Free Association – the US and Marshall Islands 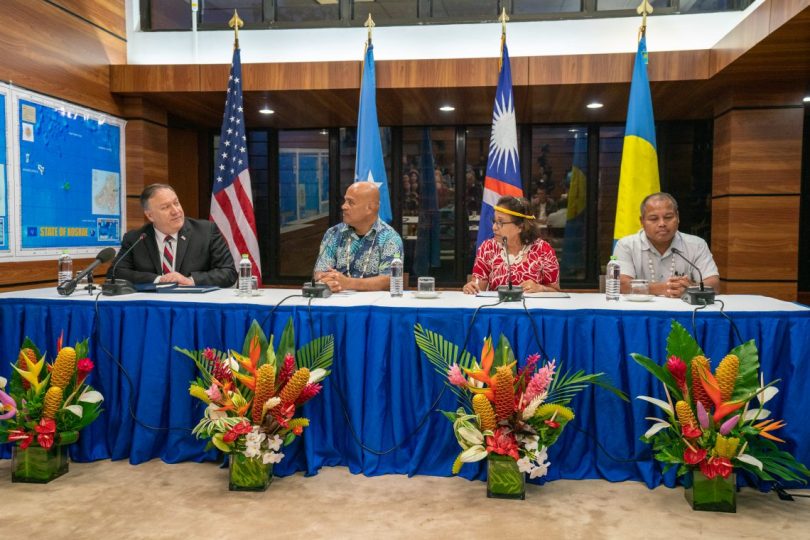 US Secretary of State Michael Pompeo with Micronesia President David Panuelo, Marshallese President Hilda Heine and Palauan Vice President Raynold Oilouch during his visit to the Federated States of Micronesia on August 2019. Picture: US Department of State/Ron Przysucha

In a flurry of activity over the past nine months, the US has rediscovered the strategic value of the freely associated states in Micronesia.

The US has opened negotiations on renewing key provisions of the Compacts of Free Association with the Republic of the Marshall Islands (RMI), the Federated States of Micronesia (FSM) and the Republic of Palau (Palau).

Each compact is a deal under which the island state receives development assistance and visa-free access for its citizens to the US for a mutually agreed period of time.

In return, the US has a strategic monopoly on the Micronesian states. In addition, the RMI permits the US to test missiles at Kwajalein atoll and Palau guarantees the US the use of certain defence sites in the future.

These arrangements dating from the 1980s, foreclose the region to the military forces of other nations and permit US forces to range at will in its waters, lands and airspace.

As the then commander of the US forces in the Pacific Admiral William J. Crowe pointed out in 1985:

The delegation of defense responsibilities and authority to the US together with the provisions that the freely associated states will refrain from any action the US determines to be inconsistent with defense and security requirements, provide the latitude needed to support our security interests.

Thirty-five years later, a report commissioned under the National Defense Authorisation Act in 2018 has come to a similar conclusion:

Taken together, the security and defense provisions of the Compacts form an essential foundation for US national security interests in the region.

In particular, as a consequence of these security and defense provisions, the Compacts deny an enormous and strategically important section of the Western Pacific to potential US adversaries, while enabling US presence and power projection in the region.

The strategic interests of the US have been central to its relationship with the Micronesian region since World War II, when American forces captured the islands from Japan and proceeded to use the area for a variety of military purposes.

Notably, they tested nuclear weapons at the Bikini and Enewetak atolls from 1946 to 1958, leaving behind a legacy of radioactive contamination in the region.

This perpetuates a US official tradition that tends to perceive the islands stretching from the Marshall Islands to Palau as little more than ‘United States assets’ which happen to hold local populations in them.

As it should, the US Department of the Interior continues to fund the Four Atoll Health Care Program, which supports health care clinics for about 20,000 people on the four ‘radiation atolls’ of Bikini, Enewetak, Rongelap and Utrok, as well as in Majuro.

Yet, the Nuclear Claims Tribunal established under the compact to compensate Marshallese victims of the nuclear tests closed in 2010 and has left some claims unpaid.

Subsequent attempts to secure compensation at the International Court of Justice and the US Ninth Circuit Court of Appeals have also subsequently failed.

The strategic interests of external powers have been the enduring context of international relations in the Pacific since the 19th century.

At that time, the map of global influence – Britain dominant, France expansionist, Germany and the US rising – was reproduced in the territorial partitions of the late colonial period.

Since the 1960s, we have seen a weakened Britain leaving, a global middle power France retaining its smallest territories, a stronger Australia becoming the major aid partner, and the hegemon — the US — preserving its strategic position north of the equator, where its control and preponderant influence stretches from the state of Hawaii through to Guam and the Northern Marianas.

It is hardly surprising that the recent phenomenon of the rise of China’s political and foreign power in the region should have re-alerted external states to their strategic positions in the region, especially given that Pacific Island states are claiming a new independence in foreign policy and diplomatic alignment.

Such a reassessment is particularly true of the US in evaluating its strategic position within Micronesia.

Among the freely associated states, the FSM is where China’s influence matters most.

Since then, and increasingly in recent years, Chinese development assistance to the country has resembled that in other parts of the Pacific Islands, including an agricultural pilot farm in Pohnpei, bridges in Pohnpei and Kosrae, a high school in Kosrae, the state office buildings complex and road upgrades in Chuuk, a gymnasium, a cargo vessel, an aircraft and a stream of scholarships for young Micronesians to study in China.

Projects of this nature offer work to Chinese companies such as the Sichuan Road and Bridge Group Corporation, which built the Okat Bridge in Kosrae. China has also contributed to the FSM Trust Fund, which is supposed to provide FSM financial independence by 2023.

At the same time, Chinese companies are major players in the vast fisheries industry of the FSM, and have attempted – though so far with little success – to develop a major tourist industry in Yap.

In return, the FSM is committed to the One China policy, having also signed up to the Belt and Road Initiative and participated in the annual Belt and Road Forums.

From the official American point of view, the steady expansion of China’s commercial and aid presence in the Micronesian region is a strategic threat demanding to be countered in the US’ national interest.

n This article appeared first on Devpolicy Blog (devpolicy.org), from the Development Policy Centre at The Australian National University. It is an edited version of In Brief 2020/04, originally published by the Department of Pacific Affairs at ANU as part of their In Brief series. Stewart Firth is a Research Fellow at the Department of Pacific Affairs at ANU. The views expressed are the author’s and does not reflect the views of this newspaper.