Opinion: Camouflaging the truth; what is said in the dark will be heard in daylight 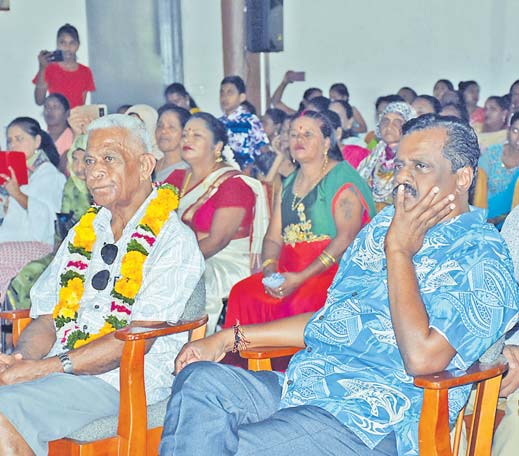 Once again, The Fiji Times of Thursday, June 23, 2022, exposes more stupidity and ridicule by a minister in the ruling party, who should know better.

As divine providence would have it, this headlined exposé is released a mere day after the general secretary of the ruling party creates a hullabaloo about reporting four opposition parties (including ours) and the Fiji Sun (Quelle surprise!) to the Supervisor of Elections.

But such is the karmic destiny and fate of FijiFirst party’s (FF) masters and their puppets, judging from their recent utterances.

Only few weeks ago, another Minister (who should know better), Dr Mahendra Reddy, who struggled to differentiate a survey from a census during a parliamentary diatribe, told devotees at a temple in Wairuku, Rakiraki, that it was Voreqe Bainimarama who gave equal rights to Indo-Fijians after the (promulgation through a decree) of the 2013 Constitution.

Dr Reddy proclaimed Mr Bainimarama was born for this task!

He said he had spoken to Mr Bainimarama who had asked him to convey this message.

By saying this, did Dr Reddy realise he was demeaning himself?

Did he realise that he just rubbished his own academic achievements, including a doctorate (PhD) he obtained well before 2013?

Did he manage such an academic feat when Indo-Fijians were still indentured labourers?

Did he achieve it in an environment of hostility by other races, particularly by the indigenous Fijian community?

Or did he graduate and land a job at the University of the South Pacific (USP), an acclaimed regional institution of higher learning that his political masters in the FF government are hell bent on destroying?

Did Mr Reddy receive any message from either Mr Bainimarama or Mr Aiyaz Sayed-Khaiyum about USP, apart from their stubborn public pronouncements of withholding the $61million of what Fiji owes, so far?

Or was Dr Reddy being kicked from pillar to post in terms of ministerial duties and travelling here and there in a dark tinted Prado like his colleagues, simply because he is beholden to his bosses?

This week’s Thursday edition of The Fiji Times exposes Minister Parveen Kumar, the ruling party’s Employment, Youth and Sports Minister, during prayers at Field Forty temple in Lautoka last weekend lauding the need for stability or the political status quo under Mr Bainimarama and Mr Sayed-Khaiyum.

In the audio recording that we have also heard, I understand he said in Hindi: “I want to give you a message. We all want to live in this country with peace and harmony. If we want peace and harmony, then we also have some obligations.

“As a citizen of this country, at times you have to take the right step. Take the road that has truth, even if the road isn’t smooth. If, by walking on that road, you will get the truth, then take that road.

“That’s why everywhere I go, even temples, I have emphasised that the political stability which this country has is very much needed.

“I pray and plead with you to not get involved in small discussions and nonsense talk. You are all educated so use your best judgement before taking the steps.”

All these stunts at temples have not been publicly condemned by the ruling party’s leader nor general secretary, so it stands to reason that they endorse this manner of conduct.

Neither did they call out or condemn Dr Reddy’s callous remarks at Wairuku temple.

Of course they won’t condemn it because the general secretary himself led the charge during the 2018 elections
campaign where he told a campaign meeting that if people did not vote for Mr Bainimarama, it would be like putting a dagger to their neck!

Regrettably the ruling party remains tone-deaf to what the electorate is feeling, and if the ruling party chooses to
hear a “so boring!” reaction at the polls, they are most welcome to continue with their losing streak.

The people are demanding better and want leadership that listens.

That’s how we know what they’re saying.

So if the general secretary for the ruling party and the Minister for Elections wants to jump on his soapbox, beating
his chest self-righteously, about proper political conduct, he ought to start from within the four walls of his own party.

No one is the least bit surprised that the ruling party can miraculously find the money (at a time when prudent
spending should be paramount) for the Prime Minister to flit off to Europe to talk about oceans, on his usual taxpayer-funded per diem rate of about $2800 per day.

What was surprising was that enroute to Lisbon; the Prime Minister pops up on the Twitterverse en route in Austria to talk about a nuclear treaty.

The challenge for the Government in their upcoming budget narrative is that it already has a shape that their new laws have directed for a “pre-election economic and fiscal update”, dated May 9, 2022.

When the budget is handed down, the conservative tone of that pre-election document, despite the miraculous 11.3
per cent “double digit” growth that was confidently forecast at paragraph 1.10, will be watched very carefully.

Because as highlighted in an earlier column, even the details of the preelection economic and fiscal update of
April 9, 2022, seemed at direct odds with the Supplementary Budget narrative of March 2022.

The advertised “budget consultations” about to begin soon, will simply be a symphony of spin.

The deeper our nation sinks into debt, the more this government robs us of our dignity.

Every time (especially before elections) the ruling party ministers scatter themselves in their normal tuiboto, ek
shanku rekha, conga line style all over the place, feeling proud as if they’ve dug deep into their own pockets to throw
around gifts that the people weren’t even asked, if they needed.

Just ask the pawn shops who, after the 2018 campaign bonanza of this Government, collected spades, forks, agricultural spray backpacks, etc, to re-sell.

The winners will be big businesses that sell the wares.

But the time for serfs and slaves buckling under an expensive Government in this country, will resoundingly draw to a close at the upcoming polls.

There’s only one word being echoed from every mouth, and from every corner of this land “change”.

* SENI NABOU is the general secretary of the National Federation Party. The views expressed are hers and do not necessarily reflect the views of this newspaper.