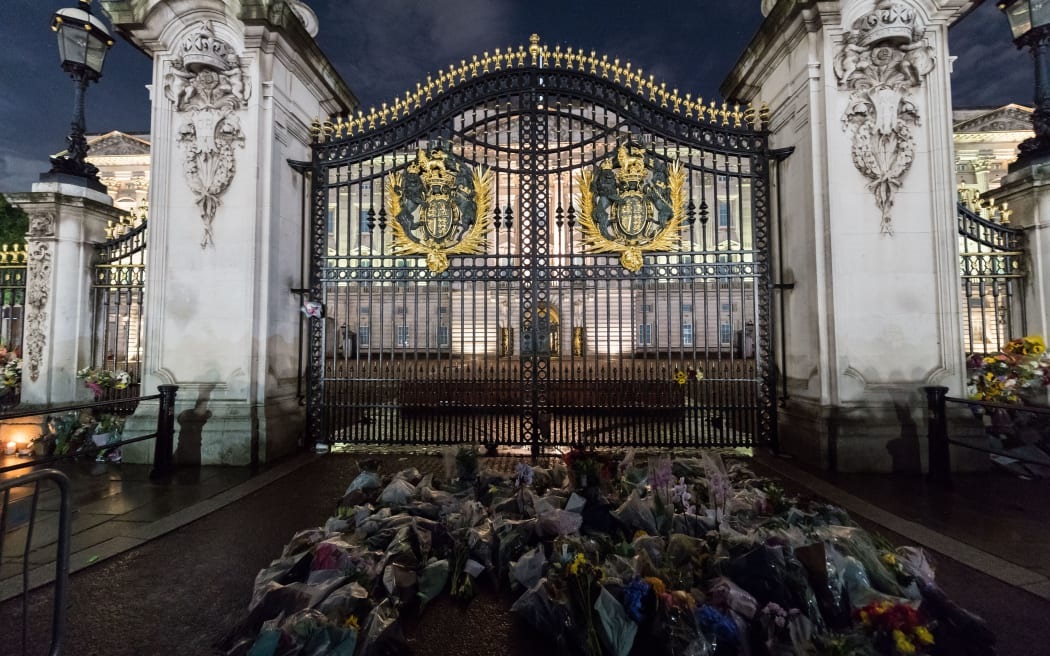 The first floral tributes placed on the gates of Buckingham Palace by members of the public following the announcement of the death of Queen Elizabeth II. File photo. Photo: AFP

When a British monarch dies, there’s a thorough and detailed plan which swings into action.

With the death of Queen Elizabeth II, “Operation London Bridge” has been triggered.

It’s the code word attributed to a formal choreographed sequence of events that will follow the death.

While no official document or plan has ever been released, there have been leaked versions over the years.

According to accounts published by Politico last year, the day of the death is known as “D-Day” and the subsequent days are referred to as D-Day +1, D-Day +2 and so on.

In the next 24 – 48 hours, Charles is expected to be officially proclaimed King. This will take place at St James’s Palace in front of the Accession Council – a ceremonial body. It’s made up of senior MPs, civil servants, Commonwealth high commissioners and the Lord Mayor of London.

The death of Queen Elizabeth II will be announced by the Lord President of the Privy Council and a proclamation will be read aloud.

King Charles III will then attend a second meeting of the Accession Council where he will make an oath to preserve the Church of Scotland.

A fanfare of trumpeters, a public proclamation and Charles will be declared as the new King.

The proclamation announcing Charles as the King will also be read in in Edinburgh, Cardiff and Belfast.

There are various plans for the different locations where Queen Elizabeth II could have died.

For Balmoral in Scotland “Operation Unicorn” means her body will be travelled to London by either royal train or “Operation Overstudy” if it’s by plane.

The Prime Minister, Liz Truss, and other ministers will welcome the coffin.

On the third day after the Queen dies, King Charles will begin his tour of the United Kingdom, starting with a visit to the Scottish Parliament and a service at St Giles Cathedral in Edinburgh.

The following day he’ll travel to Northern Ireland and then Wales.

Meanwhile, a rehearsal for the procession of the coffin from Buckingham Palace to the Palace of Westminster will take place in London.

After a procession along a ceremonial route, the coffin will arrive in Westminster Hall followed by a service.

The Queen will then lie in state for three days in the middle of Westminster Hall which will be open to the public for 23 hours each day.

According to the leaked documents, the UK Prime Minister and the Queen have agreed the state funeral will be a “Day of National Mourning”.

On the day of the state funeral at Westminster Abbey, a two minutes’ silence is planned for Midday across the nation.

A procession will also take place at Windsor – with a committal service in St George’s Chapel.

The Queen will be buried in the castle’s King George VI Memorial Chapel.

Charles will be formally crowned King and it’s the symbolic high point of the accession.

But it’s not likely to happen soon as the new monarch will be guiding the country through the mourning period.

Queen Elizabeth II succeeded the throne in February 1952 but wasn’t crowned until June the following year.

The Anglican religious service, carried out by the Archbishop of Canterbury will peak when he places St Edward’s Crown on Charles’s head – a solid gold crown, dating from 1661.

It’s the centrepiece of the Crown Jewels at the Tower of London and weighs 2.23 kgs.

The coronation is a state occasion so the government pays for it and will decide the guest list.

Charles is now the head of the Commonwealth where for 14 of the 56 countries, the King is head of state.