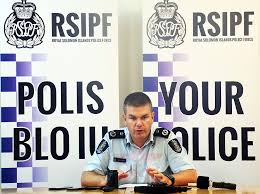 “RSIPF monitors social media very closely from the intelligence perspective so we are watching what people are saying,” Varley said.

“….and we are identifying some people who might be behind the scene who are trying to agitate for criminal offences.”

Varley added that if someone posts information online that could be regarded as inciting unlawful conduct, he can be actually charged with a criminal offence. That is incitement of, for example, violence.

“There are offences in the penal code for the offence of inciting a criminal matter,” Varley further added.

He said people need to be aware that what they posted on the internet is public.

Varley said once it is out there you cannot take it away and can be circulated and shared.

He said it can be online, on public forum or it can be many other ways but pointed out that it is unlawful to encourage people to carry out unlawful acts.

“If someone is online encouraging someone to conduct a riot, for example, that can actually constitute a criminal offence.

“We have officers who are monitoring this and looking into the possibility of identifying people who have done this,” Varley said.

He said if you see people online with this behaviour then shut it down immediately and don’t repost it.

“…. and if you are very concern about it, if you see something online you are not happy about it, you can report it to the police as well.

“Police are aware of this behaviour and police are monitoring it very closely.

“And where evidence exists that people have committed offences you can expect to see us follow that up,” he said.

Varley those who posted on social media inciting protest or inciting the potential to riot if the things don’t go their way are isolated individuals trying to cause disharmony.

“And we should not as a nation and city succumb to that pressure.

“In fact, most people in Solomon Islands want to see a peaceful conclusion and progress for this nation no matter what happens.

“There is one thing more important in Solomon Islands and that is peace.

“.. so we ask people to understand and recognise that anyone who wants to incite violence or trying to incite a riot is actually committing an offence and is against the law.

“And we want to make sure that people reject and shut it down quickly,” he concluded.