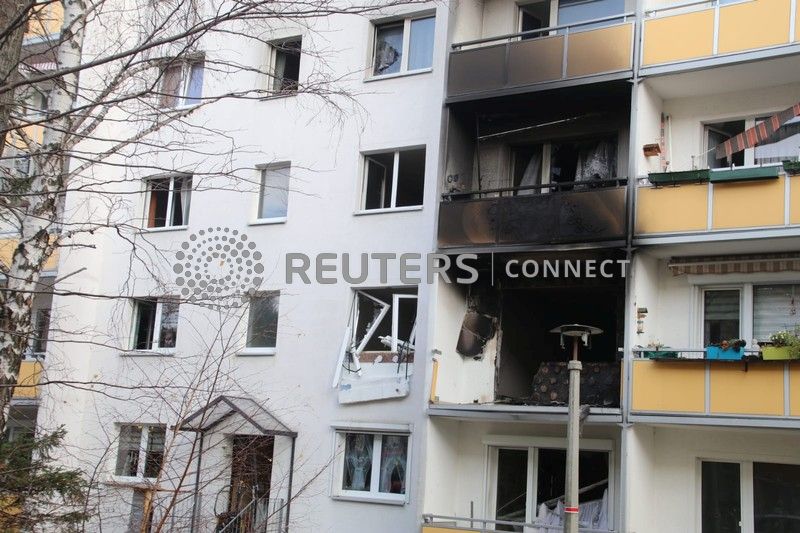 A damaged building is pictured after several people were injured in an explosion in an apartment block in the eastern German city of Blankenburg, December 13, 2019. REUTERS/Marvin Gaul.

BLANKENBURG, Germany (Reuters) – Gas canisters were found in an apartment where a blast occurred early on Friday in the eastern German city of Blankenburg, killing one person and injuring 11 others, one of them severely, the city’s mayor said.

The deceased victim was believed to be a 78-year-old man who was renting the property where the cannisters were found, officials said at a press conference, though this could not be confirmed until the body had been retrieved.

Another victim had been taken to hospital with severe burn wounds. Several police had been treated for smoke inhalation.

“We were all confronted with a picture of devastation when we arrived,” mayor Heiko Breithaupt told a news conference held in a nearby school, recounting his arrival shortly after the explosion at 9 local time (0855 GMT).

Police said that their earlier belief that war munitions had been found on the scene had not been borne out on closer inspection.

In an indication of the scale of the blast, one fireman told reporters that on rushing to the scene after the blast he found three people lying unconscious on the road outside.

The blast had torn through one section of the five-storey building, causing damage on both the street and courtyard sides. The 50 people living there would all need to be rehoused, Breithaupt said, adding that the building’s structural stability was currently being checked.

Officials believed the gas cannisters, which may have been used to supplement the house’s district heating, had caused the blast. Police were being assisted by specialist explosives teams.

The area around the property was sealed off and nearby residents were evacuated, including children at a local nursery. None of the children were hurt, police said.

Blankenburg is a city in the hilly Harz district, in the eastern state of Saxony-Anhalt.