On the road to redemption 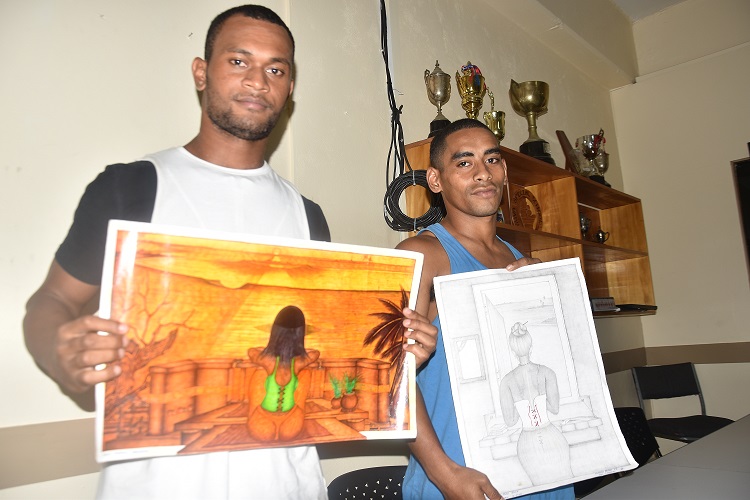 THERE are some life experiences that people go through that force them to stand still and rethink their way of life and where they are headed.

Some have been forced to go through the worst before finally realising their purpose in life, while for others it is just a sense of self-reflection to make a change in their life.

For Daniel King and Mika Tabuanavanu it took them a few months of incarceration to realise they were heading in the wrong direction with the choices they made.

In an effort to redeem themselves, the young men decided to pursue a passion they developed while being confined in the four walls of one of Fiji’s correction facilities.

“We used to see our brothers inside who would draw so we decided to learn from them and it has turned out to be something,” said Mika who spent nine months behind bars.

A former Queen Victoria School student, Mika did not successfully complete his Year 12 Examination, forcing him to return to his home in Rukua, Beqa.

He soon found employment at a resort, and was having the time of his life when a sudden wrong move cost him his freedom.

“We had been drinking and ran out of alcohol and decided to steal from our liquor shop, I got caught and spent time in prison,” the 23-year-old said.

“I was imprisoned for assault. I spent four months inside,” added David a former student of Lami High School. Greek shipping magnate Aristotle Onassis once said; “It is during our darkest moments that we must focus to see the light.”

For Mika and Daniel it was behind the four walls where they finally realised what life was like.

“Inside there, your freedom is restricted and you have to follow the rules; it was really a learning experience.

“Most of the time I had to sit and just stare out into the open space thinking how I could better myself.

“I am still young and still have a lot to live for,” said Mika who is originally from Rukua with maternal links to Dakuibeqa on the island of Beqa.

Ever since dropping out from Year 12, Daniel found employment at various places. However, poor decisions on his part led to an assault and four months in prison.

“Four months inside and I was stuck, there was no freedom, we were told when to eat and when to sleep and I really regretted what I did,” added David the third in a family of five siblings.

So it was in prison, that they developed their passion for art. After serving their sentence, both men are hoping to sell their artwork. The two came to the office with one of their completed artwork with one still yet to be finished. They said by selling their artwork they hope to be able to save enough to put them back to school and get a better future

“Both of us hope people will love our art as we also would like to return to school,” said Mika.

“I want to study at the Fiji National University but there is no money as my father is a security guard and my mother stays at home and I have a younger sibling who is still in school,” added Daniel.

It is also their desire to join an arts group that specialises in sketch and painting as they hope to further their knowledge in the discipline.