On Easter Island, burned Moai statues are a symbol of growing tensions 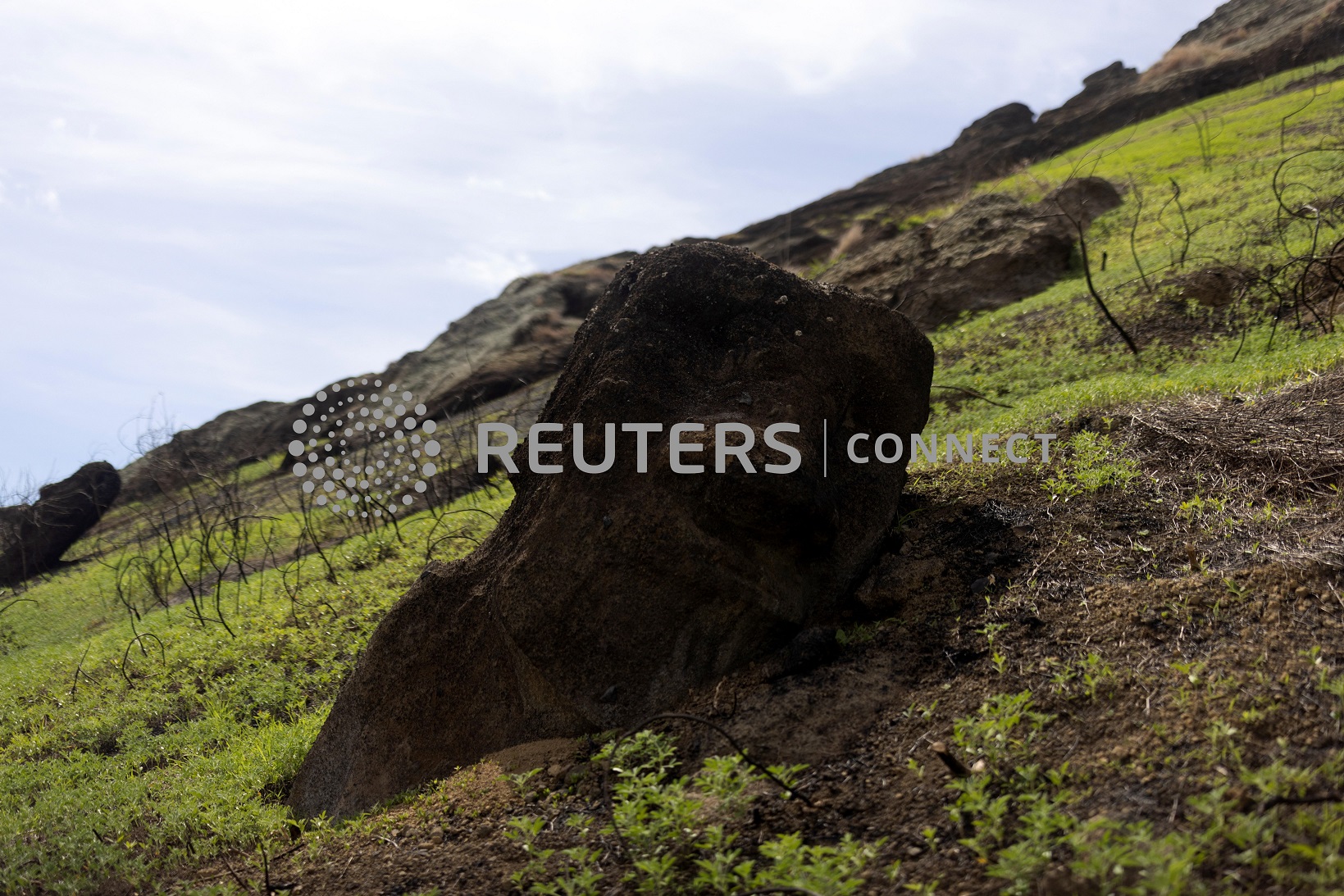 HANGA ROA, Easter Island (Reuters) – Charred Moai stone statues on Easter Island, singed in a wildfire earlier this year, are signs of a growing tension between landowners and conservationists in this tiny, remote island in the middle of the Pacific.

The island, which has been a Chilean territory since the 1880s, is known by its indigenous inhabitants as Rapa Nui and is famed for its huge monolithic human figures carved centuries ago by their ancestors.

The 164-square-kilometer island – slightly smaller than Brooklyn – has seen tension grow in recent years between old families who want to raise cattle on their ancestral lands and authorities focused on conservation.

On one side is a group of local families under the banner of the self-described Rapa Nui parliament, an offshoot of an earlier council of elders, who argue for a return to an ancient clan system for dividing up the land.

On the other: conservationists and an elected council tasked with managing the national park that makes up almost half of the island and is dotted with Moai statues. They say some people use park lands for cattle farming, at times causing fires.

“We’ve seen an exponential increase in livestock and agriculture, particularly since the start of the pandemic,” said Merahi Atam, a local archaeologist.

Chilean government data show wildfires on Easter Island have exploded in recent years, with the last two years seeing the most on record going back to the 1990s.

Thousands of miles of ocean separate Rapa Nui from its closest continental neighbor and the island has fascinated visitors and archaeologists for centuries with its giant stone Moai.

Measuring up to 72 feet (20 meters) and weighing dozens of tonnes, hundreds of these large-headed statues were carved directly from rock quarries and spread across the island.

The statues, modeled after deified islanders, have survived centuries of famine, war, epidemics and colonization, while the island’s population has fluctuated from the brink of collapse to about 8,000 in 2022.

Residents have long fought for more autonomy over the island and in 2016, the Chilean state agreed to start transitioning control of the park.

A locally chosen Ma’u Henua council is set to take full administrative control of the park by 2025, focusing on protecting the environment and archeological sites and managing tourism.

But some islanders instead want a return to the clan system which existed before the 1888 treaty between one of the last kings of Rapa Nui and Chile.

“We have to respect that hierarchy.”

Tucki says authorities were notified of the pasture burn in October and failed to prepare.

Max Ariki, a firefighter, says the local wildfire brigade lacked funding and operational preparedness. He said more funding had come since October, including a second brigade, but pasture cuts to protect the volcano and archeological sites had not been maintained for two years.

“Something bad has to happen for them to realize we exist, that we’re here on the island,” Ariki said. “It’s painful, but thanks to that fire they sent more resources.”

Petero Edmunds, mayor of Rapa Nui since 2012, blames the British-Chilean Easter Island Exploitation Company for introducing livestock over a century ago and the state and military for offering cattle to islanders after the state development agency left in the 1980s.

“Obviously you accept them and you don’t take them to your bathroom or bedroom because they’re animals, cows, horses, sheep,” Edmunds said, adding that families then started occupying former government lands.

“So what do you call that? Illegal occupation? Seizure? Usurpation? Of what? Who allowed this? Who brought the first animal?”

“The only guilty party here is the state,” he said.

Atam, the archaeologist, believes that dialogue and education about the damage from wildfires and erosion due to cattle will help convince locals to give up the practice to preserve archeological sites for the whole island.

Tucki, who claims that he is a direct descendent of one of the last kings of Rapa Nui, agrees certain archeological sites should be run collectively, but most of the land should be for the people.

“The territory belongs to the family,” he said.