On a frozen pond far from the Olympics, meet China’s ice hockey veterans 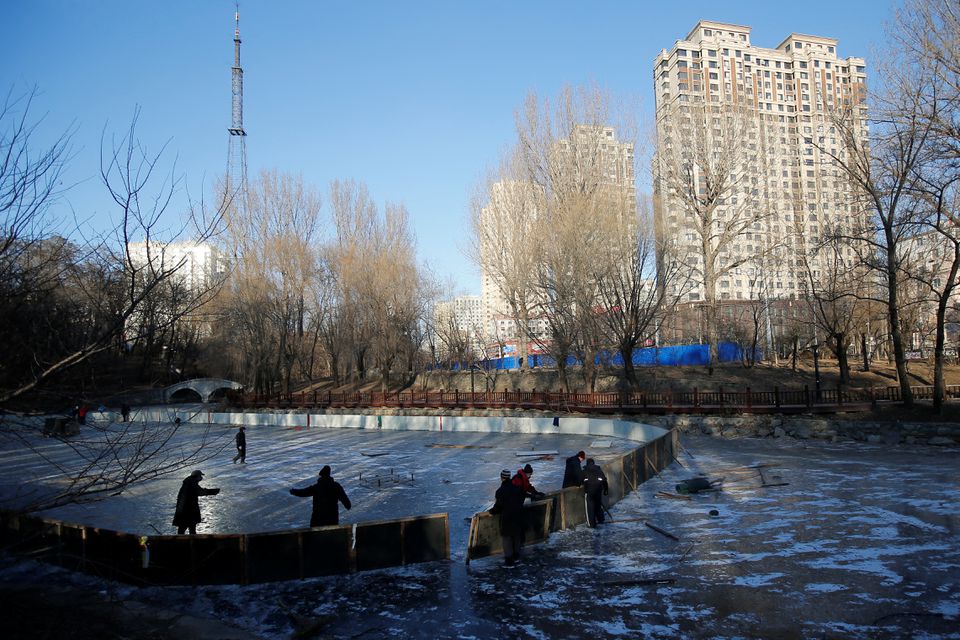 The shout rings through a coterie of onlookers by a frozen pond as 12 men, in helmets and other hockey gear, take position on a makeshift rink under a pale sun and sapphire sky.

On the unscripted prompt, the referee drops the puck onto the grey, marbled ice and hurries to one side. A hunched-over forward slaps it towards his right-winger, who, alas, misses the pass, a blunder quickly exploited by opponents.

The men, amateur players in the rust-belt city of Anshan in northeast China, are mostly in their 50s and 60s, their passion for the sport in sharp contrast to wider indifference.

The lack of interest is aggravated by the unremarkable men’s hockey team that is to compete for China in the Beijing Games next month. No one is expecting a “Miracle on Ice” moment like at the 1980 Winter Olympics, when a group of college amateurs beat the traditionally dominant Soviets.

The Chinese team, ranked No. 32 globally, was allowed to play at the Beijing Games by the International Ice Hockey Federation (IIHF) only after lengthy deliberation over its relative proficiency.

For the Anshan players, though, hockey has never been about smashing Olympic records or playing in an elite league.

Many have been friends for more than three decades. They come from all walks of life. Some are blue-collar workers, a few are civil servants, one is a police officer, others are retirees, like the boss of the league, Chu Cequn.

“They enjoy coming together to play,” said Chu, 70, who stopped playing three years ago but still occasionally referees.

“And we enjoy duelling with equally ‘old’ teams from the nearby cities of Liaoyang, Shenyang and Dalian,” he said.

Chu has organised pond hockey games for a long time, outlasting institutional support given by state-owned “iron rice bowl” enterprises in the region as northeast China’s heavy industry went from boom to bust.

But no NHL players will be competing at the Beijing Olympics due to COVID-19 concerns.

Still, Chu hopes to be there to watch the Games with his 10-year-old grandson if tickets are available.

LORDS OF THE RINK

With no operating indoor rinks in Anshan, the league claims public spaces for their sport, playing on frozen ponds and lakes in city parks.

“I’ve all the measurements in my head as we set up the rink,” said Chu, who started playing at age 30 when he enrolled in a university in 1980 after the Cultural Revolution.

“We begin by determining the centre-point of the rink. After that, we board up the perimeter with a total of 80 wooden boards, each either 1.8 metres or 2.4 metres long,” he said.

Once the rink is in place, team members take turns scraping its surface each day to rid it of impurities and dirt.

The surface then needs to be flooded with water pulled from the pond by a generator pump. The weather, at minus 20 degrees Celsius (minus 4 degrees Fahrenheit), does the rest.

“We don’t have an indoor place, so we just play for 50-60 days outside, every year,” said Li Bingru, 68, who plays both defence and winger.