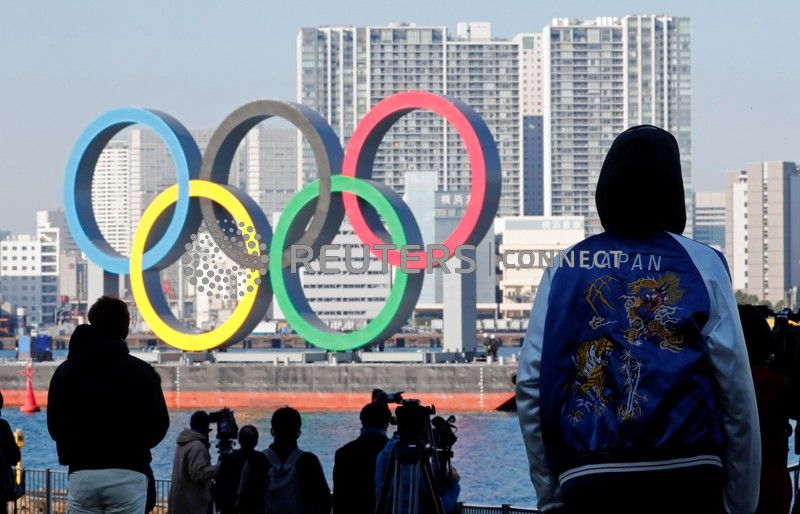 Bystanders watch as giant Olympic rings are reinstalled at the waterfront area at Odaiba Marine Park, after they were temporarily taken down in August for maintenance amid the coronavirus disease (COVID-19) outbreak, in Tokyo, Japan December 1, 2020. REUTERS/Kim Kyung-Hoon

TOKYO (Reuters) – The Olympic rings monument was reinstalled in Tokyo Bay on Tuesday, after being removed in August for maintenance, as organisers ramp up preparations for next year’s postponed Summer Games.

The return of the monument, which stands 15.3m tall and 32.6m wide and was originally installed in January, should send a signal that the Games are getting closer, Tokyo metropolitan government planning director Atsushi Yanashimizu told Reuters.

“Since the symbol is here, we want Tokyo residents and also internationally to feel that the Games are coming very soon,” Yanashimizu said.

“Also, we want everyone to feel we will have the Tokyo 2020 Games definitely next year.”

The monument, which will be lit up later on Tuesday, will remain in place next to Rainbow Bridge until the Olympics finish in August before being replaced with the Paralympics logo.

The Olympics were pushed back by a year in March because of the novel coronavirus pandemic and organisers have yet to provide a figure for how much the postponement will cost.

On Monday, Kyodo News reported that organisers estimated the cost of COVID-19 countermeasures for the Games would run to around 100 billion yen ($960 million).