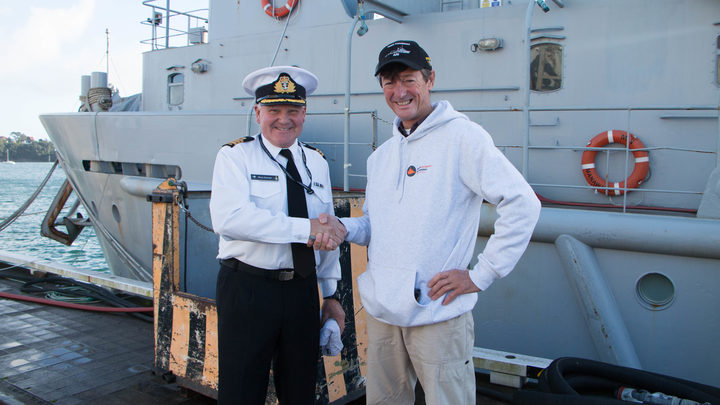 The Navy handed over the decommissioned Manawanui to an Australian firm at the Devonport naval base in Auckland this morning.

The Manawanui served the navy as a diving vessel for 30 years before its sale. Prior to that it was a diving support vessel for North Sea Oil rig operations.

Today, its former captain Muzz Kennett handed it over to its new captain Bill Fenelon of Australian-owned Major Projects Foundation, with a handshake and swapping of gifts.

Both the former and incoming crews watched on and traded ocean-voyaging tales.

The ship, which carries up to 31 crew and sports a 15 tonne crane, a four point anchoring system and welding equipment will now be used to prevent oil spill damage from old war ships in the Pacific.

Captain Kennett was delighted the ship would stay on the seas.

“Although their focus won’t be on ordinance, and it’s more on ships and removing oil, it’s still a similar type of work,” he said.

“I’m glad it’s gone to the foundation, it’s a real worthy cause, and a good thing for the ship to continue her life at sea rather than at the bottom of it.”

The 43-metre-long ship’s home port is at Whitianga.

New owner Paul Adams said the ship would be the first in the fleet and one of the only ships carrying out oil spill prevention in the Pacific.

For Adams, a hobbyist diver, it’s something of a personal quest. During a diving holiday in Micronesia he noticed “oil glugging” out of the shipwrecks.

He asked locals what was being done about it, and they said nobody was helping them.

“They’ve been pleading everywhere around the world to try and bring attention to the problem because if one of the ships there bursts open, it will decimate the fishing, decimate the diving industry and decimate the locals,” he said.

There are about 3000 sites in the Pacific that need protecting, he said.

The ship has been brought through Adams’ company, which specialises demolition work, but the not-for profit foundation will rely on public donations, volunteers, and some paid staff.

And the new captain, Bill Fenelon, is more than happy to sign himself up.

“It’s great that there’s people out there that have the money behind them to do work like this,” he said. “That’s why I’m very happy to get involved – these things have to be done.”

The crew will sail the newly named MV Recovery to Newcastle in Australia in two weeks’ time.

There, they will test the ship and make some minor additions before taking it on its first major voyage to the tropics next year.