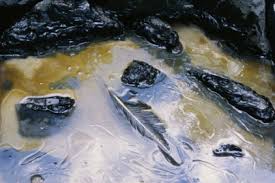 The oil spill at Draunibota bay in Lami last week is believed to have been caused by ladies who were collecting kaikoso.

Pictures posted on Facebook last week by the Suva Harbour Foundation showed an oil spill at the Water Police jetty in Lami, appearing as if the oil came from the jetty. Police spokeswoman Ana Naisoro referred all questions on the spill to the Department of Environment (DOE).

Speaking to The Fiji Times on Thursday, resident Pemo Silikiwai said a group of ladies who were out collecting kaikoso told him they came across two containers, approximately 20 litres, on one of the islands in the bay and decided to use them to hold their catch.

Mr Silikiwai said the ladies walked by his house after their trip and were carrying the containers, but they had emptied out the contents and washed the containers in the sea and that the containers were probably full of oil that came from the derelict ships on the other side of the bay.

“Some of the boys in the area who go fishing out there must’ve climbed aboard, brought it off and hid it on the island to sell,” he said.

He said, however, it is not the first time a spill like this has happened in the area and that oil had leaked from the derelict ships before. “Just last week one of those ships sank and there has been oil that has leaked from the ships in the past.”

Ms Singh also said that the DOE will be in the area in the coming days to conduct community awareness and would meet with the Maritime Safety Authority of Fiji (MSAF) and Fiji Ports Corporation Ltd (FPCL) sometime next week.

Questions have been sent to the permanent secretary for the Ministry of Waterway and Environment Joshua Wycliffe, MSAF, FPCL and the Suva Harbour Foundation.