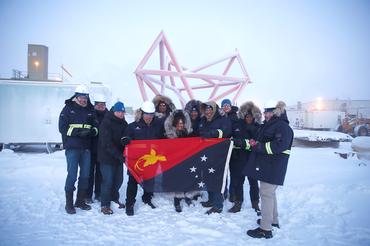 Participants pose for a photo with a Papua New Guinea flag during a stakeholder field trip to Oil Search facilities in Prudhoe Bay, Alaska, U.S. January 2019. Photo supplied by Oil Search/Handout via REUTERS

MELBOURNE (Reuters) – With a giant gas project expansion in the tropical highlands of remote Papua New Guinea bogged down by politics, the country’s biggest company, Oil Search (OSH.AX), is turning for growth to the other side of the world in Alaska’s frozen wilderness.

Australia-listed but headquartered in Port Moresby, the A$10.7 billion ($7.2 billion) oil and gas producer has shaped the industry in Papua New Guinea over the past 90 years, helping drive development in the impoverished nation.

But the scale of its PNG projects has left it dependent on decisions by giant international partners, while government demands for a bigger stake in resource projects may delay a planned $13 billion liquefied natural gas (LNG) expansion.

The confusion has opened a window for Oil Search to push ahead with a promising field in Alaska’s North Slope oil region that it bought into in 2018 and where it is the project operator.

Despite a steep learning curve, it plans to start producing as early as 2022 to help meet a target of doubling its annual output to around 60 million barrels of oil equivalent by 2025.