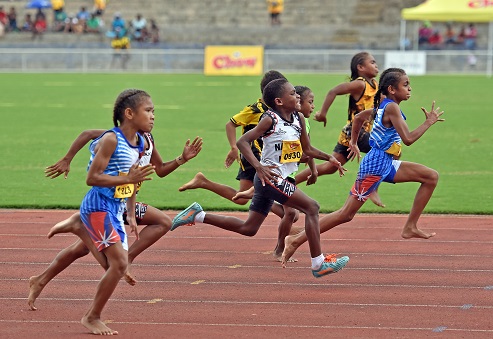 The under 9 girls 75 meters final during the first day of the FMF Chow games at ANZ Stadium. Picture: RAMA

THE implementation of the one break rule at the FMF National Chow Games over the weekend has raised certain issues on the games officials and supporters with the question arising as to why the officials have to disqualify the athletes for false start at a young age with no second chances.

Osea Waqa is one of the country’s only qualified starter who has spent around two decades as the gun man in the starting block for any athletics competition concerning primary schools, secondary schools and national level.

In the history of his job description, Waqa has been a marked person by athletes and supporters with all the negative comments he gets for disqualifying an athlete and he has learnt to absorb all the comments and adapt to the environment.

Waqa said for the first time in the history of the Chow Games when they implemented the one break rule, there wasn’t any break start from the under 10 grades to the under 14 grade.

“For the first time in the history of the Chow Games there hasn’t been any false start in the 100 metres finals and that’s history itself.

“I’ve received swears from the crowd for disqualifying athletes especially in primary school level, but when this athletes reach high school, they’ll be better athletes and won’t make the same mistake,” said Waqa.

Pacific sprint king Banuve Tabakaucoro supported the implementation of the one break rule that was implemented for the first time this year.

“I know a lot of people might not like it but this is the time time where we starting breaking those habits so if we’re not implementing it now than when….we’ve seen some under 12 and 13 breaking and we could have done something about that.

“If we introduce this law from the under 9 grade then by the time they reach the Coca-Cola Games, they won’t repeat this same mistake,” said Tabakaucoro