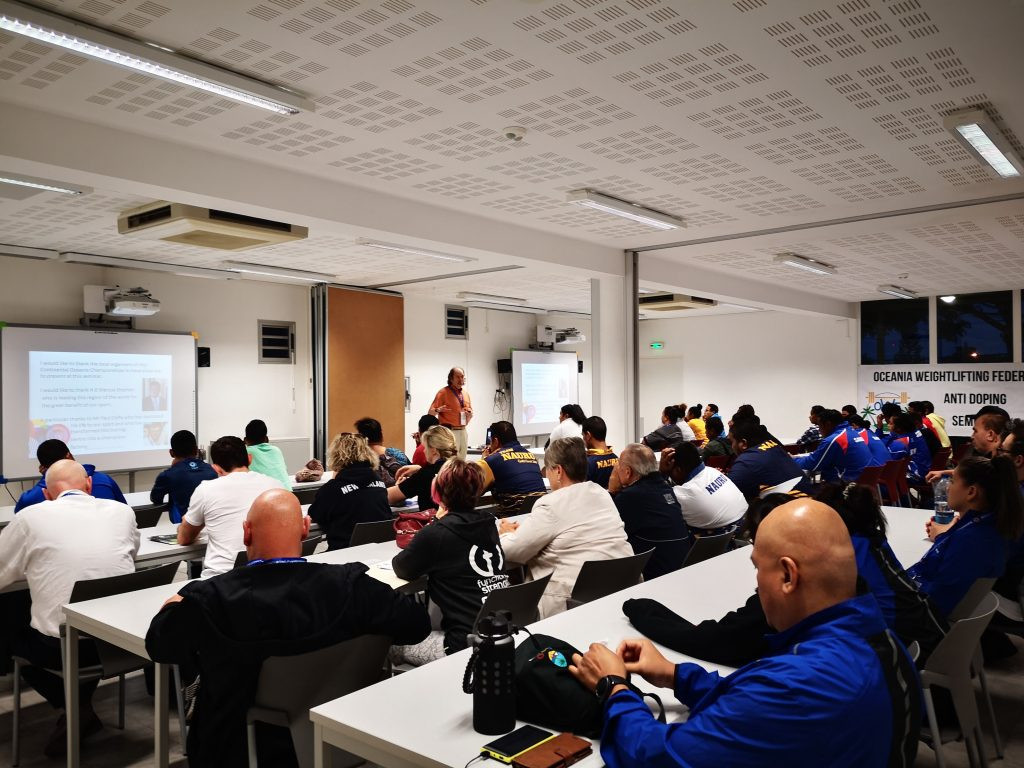 The International Weightlifting Federation claims to have received assurance from countries in Oceania of their full support for the sport's new Olympic qualifying system. Picture: IWF

NOUMEA,(INSIDETHEGAMES) – The International Weightlifting Federation (IWF) claims to have received assurance from countries in Oceania of their full support for the sport’s new Olympic qualifying system.

The new system, which applies to the Tokyo 2020 Games, was the focus of one of the three education seminars held by the Oceania Weightlifting Federation (OWF) in conjunction with the recent Oceania Championships in New Caledonia.

IWF director general Attila Adamfi held a lecture on it with the attendees said to have been very pro-active.

The show of support comes after Kazakhstan, the nation with the worst doping record in weightlifting, angered rival nations by appealing to the Court of Arbitration for Sport (CAS) over the new system.

While countries with a clean record can send eight athletes to Tokyo 2020, Kazakhstan can send a maximum of two – one man and one woman – because its athletes have been caught cheating so often.

No nation in the world has had more positives than Kazakhstan since 2008, the date which the IWF used as a start point in assessing its members’ doping record for the purposes of awarding quota places for Tokyo 2020.

Several other countries are restricted to reduced places in Tokyo because they have accrued 20 or more positives in the past 10 years, Russia and Azerbaijan being among them.

No date has been announced for the CAS hearing, at which the IWF is confident it can successfully oppose the appeal of Kazakhstan – one of nine countries currently serving a one-year suspension imposed by the IWF for multiple offences.

In a statement, the IWF said that the principle aim of its radical new system was “protecting clean sport” and pointed out that the qualifying process had been approved by the International Olympic Committee.

Athletes will be tested far more often than in the past, as they must compete at least six times in the 18-month qualifying period that starts on November 1.

The anti-doping seminar was led by Patrick Schamasch, chairman of the IWF’s Anti-Doping Commission.

The aim was to raise awareness among youth athletes, coaches and doctors of the dangers and consequences of doping, and provide useful information for all athletes in the field of key anti-doping topics.

Schamasch also highlighted the importance of fair play and the prevention of doping in weightlifting.

Representatives from 10 countries took part in the women’s development seminar.

The lecture was held by OWF official Lilly Coffa, while Papua New Guinea’s Dika Toua, the first-ever woman to lift weights at an Olympic Games when she competed at Sydney 2000, also participated.

The seminars were supported by the IWF, which is due to hold an Executive Board meeting here in Uzbekistan’s capital across tomorrow and Thursday (July 5). The meeting will be followed by the IWF Congress on Friday (July 6).