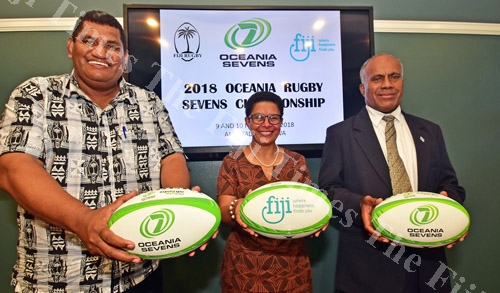 DUBBED as the region’s premier sevens tournament, the 2018 Oceania 7s is expected to see all the top teams together at the ANZ Stadium in Suva in November.

The tournament will be featuring 21 teams, 13 to participate in the men’s competition and eight for the women’s event.

The two-day event will be significant to all the teams as the HSBC World Rugby Sevens Series will kick-off just at the end of the same month and other Pacific Islands teams will be aiming to use this opportunity qualify to the world stage.

“The Oceania 7s tournament is where the champions of sevens rugby get together and compete to the highest level of competition as they look forward to another new series that begins at the end of November,” Cathy Wong, director of Oceania Women’s Rugby said.

Minister for Youth and Sports Laisenia Tuitubou said the Oceania 7s tournament was another milestone achievement for Fiji in terms of exposure, staying healthy and development.

“As always after hosting some successful events such as the Super Rugby, ITTF table tennis and recently we hosted the ICC East Asia T20 World Cup Qualifier, the intension of the Fiji government is very clear that is we want to make Fiji a destination for hosting international sports events and not only rugby,” Tuitubou said.

Meanwhile, the Fiji Rugby Union chief executive officer John O’Connor said the tournament would be a perfect example of how Fijians treated sevens rugby as a religion.

“We always believe that Fiji is always the spiritual home of sevens rugby,” O’Connor said.

“The Oceania 7s tournament is only a pathway for more international 7s events and we are looking forward to hosting the tournament.

The event will be held on November 9-10, at the ANZ Stadium in Suva.