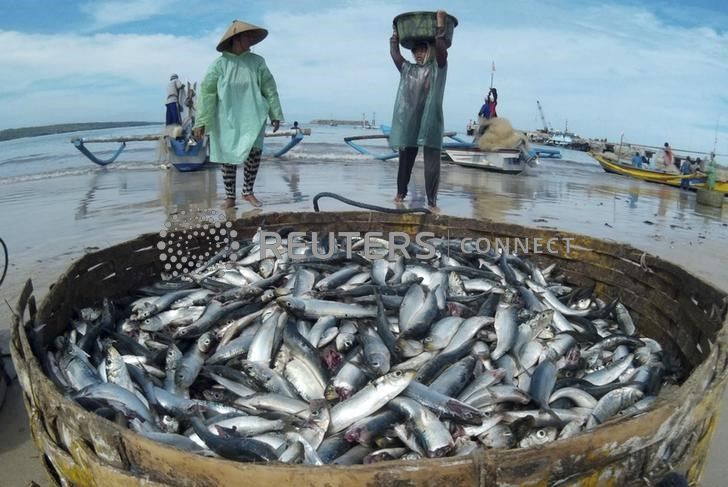 A worker carries lemuru fish as he walks at Kelan Beach in Badung, Bali resort island in this December 12, 2014 photo taken by Antara Foto. The unstable weather conditions and high waves in the Strait of Bali makes it difficult for fishermen to catch fish. Picture taken December 12, 2014. REUTERS/Antara Foto/Yusuf Fikri (INDONESIA - Tags: ENVIRONMENT SOCIETY) ATTENTION EDITORS - THIS PICTURE WAS PROVIDED BY A THIRD PARTY. FOR EDITORIAL USE ONLY. NOT FOR SALE FOR MARKETING OR ADVERTISING CAMPAIGNS. THIS PICTURE IS DISTRIBUTED EXACTLY AS RECEIVED BY REUTERS, AS A SERVICE TO CLIENTS. MANDATORY CREDIT. INDONESIA OUT. NO COMMERCIAL OR EDITORIAL SALES IN INDONESIA

LONDON (Thomson Reuters Foundation) – The ocean could provide over six times more food than it does now with better management and more technological innovation, scientists said on Tuesday, adding that boosting cultivation of bivalves like mussels and clams could be especially beneficial.

They estimated the oceans could provide more than two thirds of the animal protein that U.N. food experts predict will be needed to feed the world in future. Fish currently accounts for about a fifth of animal protein consumed by humans.

Cultivating food from the ocean generally has a lower impact on the climate than land-based agriculture, and is not limited by the same land and water constraints, the scientists said.

Food from the seas is also highly nutritious, containing essential vitamins, minerals and fatty acids, they said in a report to be released at a symposium on fisheries hosted by the U.N. Food and Agriculture Organization in Rome on Tuesday.

“The ocean has great, untapped potential to help feed the world in the coming decades, and this resource can be realised with a lower environmental footprint than many other food sources,” said lead author Christopher Costello.

“If we make rapid and far-reaching changes in the way we manage ocean-based industries while nurturing the health of its ecosystems, we can bolster our long-term food security and the livelihoods of millions of people.”

The report comes at a time of rising concern about over-fishing caused by a combination of factors including illegal fishing, fishing subsidies, the use of the wrong fishing gear and environmental degradation which is damaging nursery grounds.

With reforms, the scientists said the fishing industry could boost catches by 20% compared to today, and by up to 40% compared to projected future catches.

But they suggested the greatest potential gains lay in expanding the cultivation of bivalves like mussels, scallops and clams, which feed off organic matter in their environment.

This could also help improve water quality and create habitats for wild fisheries.

The scientists also called for more research into the potential of seaweed as a food source, especially as a replacement for fish-based ingredients in animal feed.

Studies suggest that certain seaweeds may reduce methane emissions from livestock which are a significant contributor to greenhouse gas emissions.

The report has been produced for an initiative spearheaded by 14 government heads called the High Level Panel for a Sustainable Ocean Economy, which aims to push the ocean to the top of global agendas.