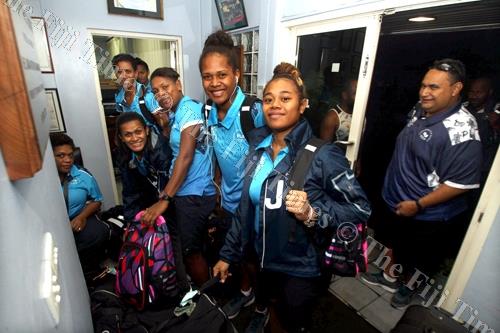 Members of the Fiji Pearls pack their gear before departing at the FASANOC office in Suva on Thursday evening. Picture: ELIKI NUKUTABU

The Vicki Wilson-coached side played New Zealand, Jamaica and Malawi in the competition.

“We had a good competition to build up towards the Commonwealth Games,” she said.

“The girls were exposed to a top level competition against those teams.

“The players are all geared up to face the challenges in the Commonwealth Games and we are looking at doing our best.”

Nasemira, who is a police inspector, said they knew the challenges ahead in the competition.

“We had strong team and the girls built confidence in them playing against New Zealand. However, things would not be easy in the Commonwealth Games,” she highlighted.

“New Zealand is second in the world so playing them was a good match.

“We came back from New Zealand and continued with our training and the players are physically, mentally and spiritually ready for the Commonwealth Games.”

The competition starts from Wednesday.