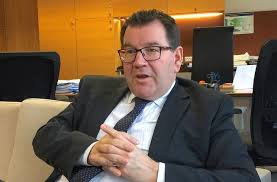 WELLINGTON (Reuters) – Releasing what it said were key details of Thursday’s budget, New Zealand’s main opposition party slammed the government for “all spin and no substance” in its highly-anticipated wellbeing budget.

Bridges said the government’s budget would see defense spending go up sharply to NZ$1.3 billion ($851.37 million), from NZ$641 million last year, and double spending in forestry with an extra $138 million.

Another $740 million would go for international aid, which Bridges said was just $47 million last year, and $744 million for healthcare.

“This has nothing to do with the government’s wellbeing priorities,” Simon Bridges said in a statement.

Prime Minister Jacinda Ardern has said the government would unveil the nation’s first ‘wellbeing’ budget on Thursday which would prioritize areas like mental health, child poverty, domestic abuse and others.

“The Wellbeing Budget was meant to be transformational but it’s all spin and no substance,” Bridges said.

In its response to the leak and the claims of the opposition, the government said that some details were incorrect and the wellbeing initiatives were still to be revealed on Thursday.

“This is not budget 2019,” Robertson said in a press conference addressing the leaked budget details.

The major wellbeing initiatives that the government is putting forward as part of the budget will be released on Thursday, he said.