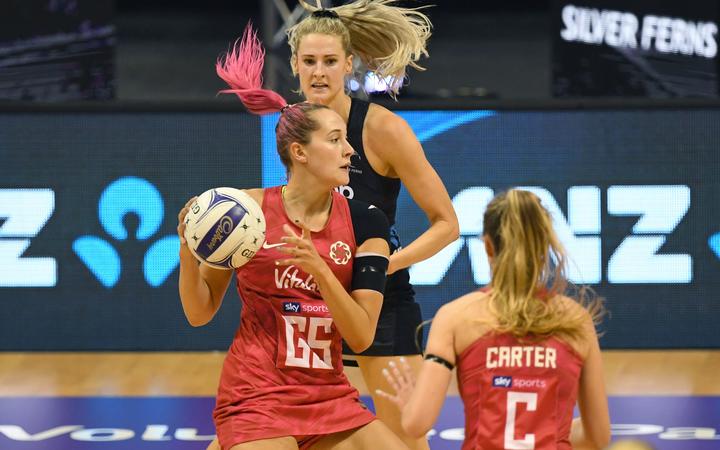 When new Southern Steel import George Fisher was 16, two New Zealand netball icons sparked a resolve in her to one day play netball on the other side of the world.

Renowned New Zealand coach Robyn Broughton happened to be the head coach of the Mavericks that year, while former Silver Fern Joline Johansson (nee Henry) had also joined the side.

The New Zealand pair were nearing the end of their careers, having formed a strong bond at the Central Pulse in the ANZ Championship. Broughton and Johansson both left the Pulse after the 2015 season and looked abroad.

The fact that Fisher is heading to the side Broughton once coached is not lost on her.

“The netball world is a very small world and everyone seems to be linked to each other in some way but no it is really really cool that she was like the first experience I had of that sort of coaching and now I’m out here where she used to be coach, it’s quite crazy,” Fisher said.

Fisher couldn’t have found a more experienced pair to mentor her in her first season of Superleague netball as a 16-year-old.

“It was like ‘wow, this is who I’m being surrounded by’ so it was exciting. It was the first time I’d ever properly experienced that complete different style of netball and it being in my first season it was just amazing.

“Coming onto court and having Joline there it was quite nice because I had someone so experienced around me it made you feel more comfortable. And if I was really failing she would take the heat a bit sort of thing.”

Fisher said it reinforced a desire to eventually make a career move to New Zealand.

“It was definitely something that really made me think about my netball differently because I honestly just loved the style like it’s completely completely different.

“And I loved how honest Robyn was so she was just very much to the point like ‘this is the drill, we’re going to go do this’ and it was new and fresh and stuff I hadn’t done before. It definitely sort of made me want to do more.”

“And she obviously played out in New Zealand and I was like ‘I really want to be like her when I grow up’ and then my first season having Joline and Robyn it just was like ‘Yip I really really want to go now sort of thing.”

While Fisher is still young at just 22, she’s been part of the England netball programme since she was 14.

She’s won 15 caps with the England Roses after making her senior debut in 2017 as a teenager and the 1.88m shooter wants to take her game to new heights.

“Just my netball knowledge and reading the game, where I need to be and my position and stuff like that.

“I just want to take everything I can in and then see where I end up and I feel the girls out here are so clever with how they move the ball through the court and I kind of want to see if I can do that.”

Fisher shed several kilos last year after she made a conscious decision to improve her fitness and diet.

“I finished university in March last year about the same time lockdown hit. And it was kind of like ‘right I’ve finished uni now’ and I was so ready for the first time in my life to be like a full-time netballer and really give it my all. Then obviously lockdown hit and I was like ‘right now I need to motivate myself, netball is going to come back’ and I wanted to come back better and fitter than ever.

“So I definitely took my fitness very very seriously. I was always out on a run or I was lifting weights in my garden and also dietary wise I started taking that a lot more seriously and started playing around with my diet, with eating meat, not eating meat, eating fish and figuring out what made my body feel best.”

Fisher said she felt a difference out on court.

“I definitely feel a lot fitter …I feel a lot more aerial like I feel like I can get up a bit higher and stuff so yeah I think it has it’s benefits, it also has it’s downfalls. I’m definitely a little bit easier to push around now so I need to get in the gym and start lifting some heavy weights.”

At the end of 2019, the Steel lost the services of classy shooters Te Paea Selby-Rickit and South African import Lenize Potgieter, when they moved on to other clubs.

As the side was rebuilding its shooting end last year, it cruelly lost Georgia Heffernan and Jennifer O’Connell to ACL injuries.

Steel coach Reinga Bloxham will be holding out a lot of hope that Fisher and Tiana Metuarau, who’s moved from the Pulse, can establish a strong shooting partnership.

After spending two weeks in managed isolation, Fisher joined her new team-mates during the recent pre-season tournament in Ōtaki.

It was her second stint of managed isolation in New Zealand, having come over with the England Roses last year for their three-Test series with the Silver Ferns.

“I drove from Wellington Airport to Ōtaki and it was just like my first sort of proper impression of New Zealand which was this beautiful beautiful drive and this gorgeous place so it was a very nice experience.”

Fisher said her time in New Zealand so far had also felt very much like a cultural exchange.

“Literally as soon as I got there I met Jo [Morrison] one of our coaches and I went into the room and everyone welcomed me and they sung to me in Māori and it was absolutely amazing then afterwards they told me more about it and stuff, which was awesome.”

Having just come out of isolation Fisher didn’t get on court in Ōtaki but was impressed with what she saw.

“I loved watching the feeders sort of just like throw it into the shooters from literally anywhere on the court, which was really cool. It’s definitely a very physical sort of league and game in every aspect of the word, the girls literally go all out there, like working hard, they’re constantly on it, it was good to watch.”

Fisher is flatting in Invercargill with two other recruits to the side Ali Wilshier and Sarahpheinna Woulf.

Fisher said it was a huge relief when she got the news that she would be allowed into New Zealand, with her first two visa applications knocked back.

“When it came through Reinga messaged me to tell me and I rung my parents and I was like ‘oh my gosh’ and my parents were totally stoked for me and I was honestly so relieved and thankful because so many people helped me to be here with letters and stuff like that.”