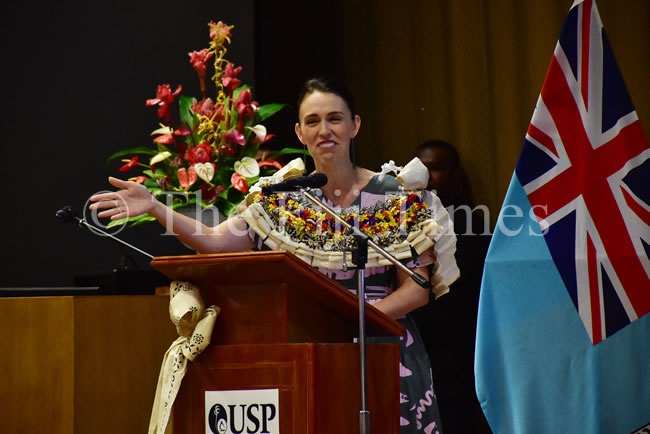 THE New Zealand Government was mindful about giving youth a voice, and its Parliament allowed citizens to submit and present in front of parliamentarians, no matter what their age.

This was New Zealand Prime Minister Jacinda Ardern’s response to Pacific Youth Council representative, Ernest Gibson, who wanted to know how youths were engaged throughout the process of policy design.

He asked the question during a Q&A session with Ms Arden at the University of the South Pacific on Wednesday.

Mr Gibson wanted to know whether youths were involved in policy design, particularly in regards to regional issues and bilateral processes.

The NZ PM said back home, the parliamentary system was designed in such a way that anyone – including children – could prepare and present a submission to Parliament.

“And increasingly our young people are doing that,” she said.

PM Ardern said NZ also aspired to be the best place in the world to be a child.

“The best example I can give about how we want to change the way we do things is our child and youth well-being strategy.

“When we prepared that strategy, we prepared post cards that we took out to schools around the country where we had young people fill them in.”

In the post cards, young people were asked what they would want to tell the PM that would make NZ better for them.

She said thousands of children responded with powerful messages.

“They were so powerful to me that I framed some of them and hung it on my wall as a reminder of the importance of a child’s voice.”

In the Pacific, she said, youths still had a powerful voice.

“At Pacific level, I have to say I feel like your voice does come out quite strongly. “So we need to constantly be mindful to give youth their voice, so keep going.”